The number of open BitMEX Bitcoin futures contracts (XBTUSD) tends to peak at around $1 billion, or 100,000 BTC. Having open interest heavily dependant on key psychological levels shows that the crypto derivatives market has matured.

Is the crypto derivatives market maturing?

The crypto derivatives industry has long been considered a niche one, catering to a handful of high-risk traders whose trading style is often reflective of their gambling addiction. However, as the crypto market matured, so did its derivatives.

The biggest increase in interest crypto derivatives saw happened right after the notorious crash of December 2017, as traders were looking for ways to hedge against the decimated prices. One of the first to offer high-leverage derivatives was Hong Kong-based BitMEX, whose 100x leverage was marked by many as borderline insane.

This is especially true when it comes to BitMEX’s Bitcoin perpetual futures contracts (XBTUSD). The high-risk, high-leverage contracts offered by BitMEX tower over those of much more established Chicago Mercantile Exchange (CME).

BitMEX sees a much higher market activity than its competitors, as the platform has recently seen a high increase in open interest. Open interest, or the total number of unsettled options or futures contracts, is a measure of the flow of money into the derivatives market and often indicates market maturity.

The overwhelming sentiment of the maturing market seems to be bullish, as over 80 percent of XBTUSD positions are long on Bitcoin.

Crypto analytics firm Skew Research found that open interest for BitMEX’s Bitcoin futures (XBTUSD) has a tendency to peak at a certain level. Data has shown that the platform sees the largest number of outstanding futures contracts at around 100,000 BTC, or $1 billion. 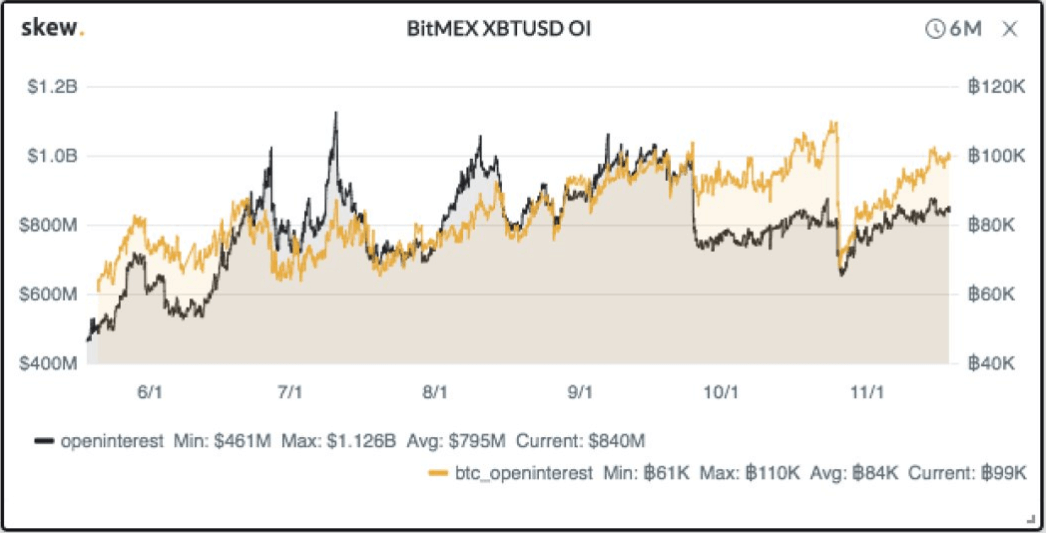 According to BitMEX Resources, when open interest on the platform reaches unusually high numbers over 100,000 BTC a period of increased volatility in BTC’s price is expected.

With trading volumes on major exchanges in decline, this could be the calm before the storm as Bitcoin is gearing up for a huge jump.