Apart from our Rainbow Crypto Expo, we are also bringing you the Rainbow Bitcoin Weekly — An analysis of Bitcoin indexes in the past week.

The price trend of BTC of last week fluctuates rapidly which can be clearly seen from the daily candlestick chart’s boll. Today’s critical ratio of the candlestick chart is much below optimistic. The volume ratio is still falling with no signs of bouncing back. Although the On-Balance-Volume keeps increasing but remains below average with non-sufficient power of bouncing back due to the massive resistance of breaking through. The market is still fluctuating in a certain range of steady. Therefore, it provides ample opportunities for copycat coins. As a result, a large portion of the funding from the market will be transferred from BTC into smaller currencies.

Metaverse NFT has still been the most popular topic over the last week. Governments and corporations have expressed their support to the conception of the Metaverse. One of the big four record companies, universe music, has announced that they are expanding their business into Metaverse. It is expected that Metaverse will be the trending topic in the second half-year.

The recap of the additional data analysis for the past week is down below.

Among the whole network, last week’s average hash rate of Bitcoin has been flat compared to the week before. There are barely any fluctuations. The highest of last week has reached 175.3 Ehash/s while the lowest has reached 146.1 Ehash/s. The number of on-chain transactions has been steady. The value of the Bitcoin hash rate among the whole network has been doubled since the low point in June this year. Hash rate is considered as the basis of Bitcoin since it directly affects the market price of Bitcoin. It is fair to say that the hash rate is the core stone of Bitcoin’s long-term value. 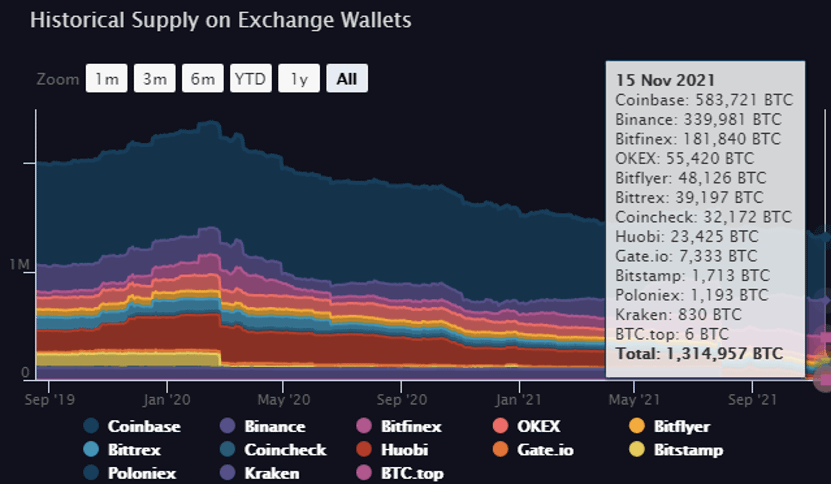 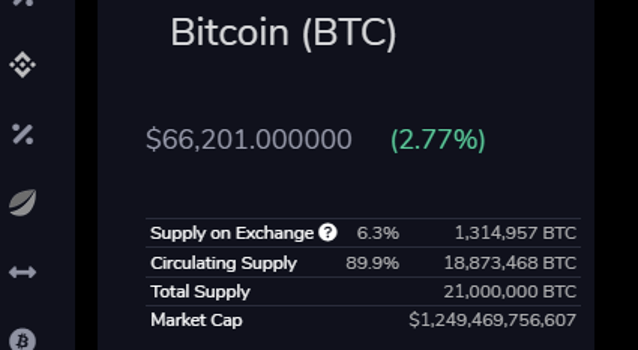 Last week’s reserved amount of Bitcoin upon each mainstream exchange has been decreased to a total of 1.314 million BTC which is 7449 BTC less compared to the week before. The pressure of selling off is decreased which means the risk of Bitcoin’s market price falling off massively is small. The supply of Bitcoin among exchange wallets has been maintained to an approximate ratio of 6.3%. The circulation of Bitcoin of last week remains constant compared to the week before.

The supply of Bitcoin among exchange wallets is a vital index to monitor the trajectory of Bitcoin’s market price. The net inflow foreshadows the large pressure of selling off their Bitcoin while the net outflow indicates that the investors are more likely to hold their Bitcoin.

The open interest of Grayscale Trust 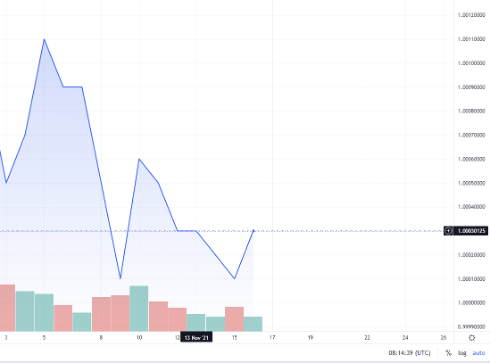 Last week’s USDT premium rate on November 13 is 1.00030125. The USDT premium index is the ratio of USDT/USD and it reflects the volume of fund which enters the market.

Last week’s fear & greed index generally remains constant. The average fear & greed index fluctuates between 70 to 75 meaning the market is fairly confident with the trending of the price. However, the greed index maintaining a relatively high value in the long term often foreshadows the risk of massive falling off. It is recommended to carefully manage the investment for controlling risk. Fear & Greed Index, also known as VIX (Volatility Index). It is originally a stock market index that contains many factors such as market volatility, market trading volume, social media heat, and Google buzzwords analysis. The threshold of this index is 0 to 100. The lower index indicates the investors are more likely to sell while the higher index indicates the investors are more likely to hold. Fear & Greed index can be used to predict the potential risk for helping to make investment decisions. An extremely low fear & greed index could bring potential opportunities for buying while an extremely high fear & greed index could bring massive change to the market. 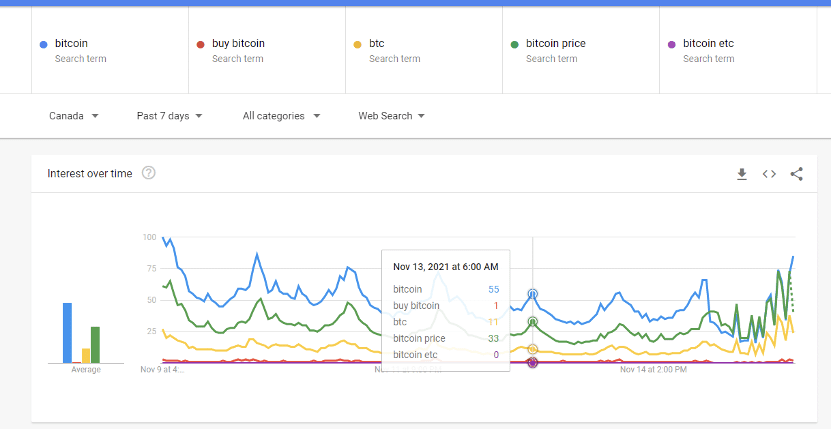 Disclaimer: This article is NOT in any form an investment recommendation, please research carefully before you make any investment decisions. The price of bitcoin is $64,000 while this article is being written.