Big four multinational professional services company, Deloitte, has conducted a 2019 survey regarding what executives from big organizations think of blockchain. The data shows that interest in blockchain-based technology is generally increasing.

83% Of Executives Believe In Blockchain

Deloitte published its annual survey showing what executives think about blockchain and its potential. It was conducted across 1,386 senior executives in large corporations from a dozen countries (The U.S., U.K., UAE, Switzerland, Singapore, Luxembourg, Israel, Hong Kong, Germany, China, Canada, and Brazil.)

83% of all participants have responded that they see compelling use cases for blockchain, which is actually a 9% increase from last year. A similar gain is noted among the executives who believe that if they don’t adopt blockchain technology, they will lose a competitive advantage – from 68% in 2018 to 77% this year. 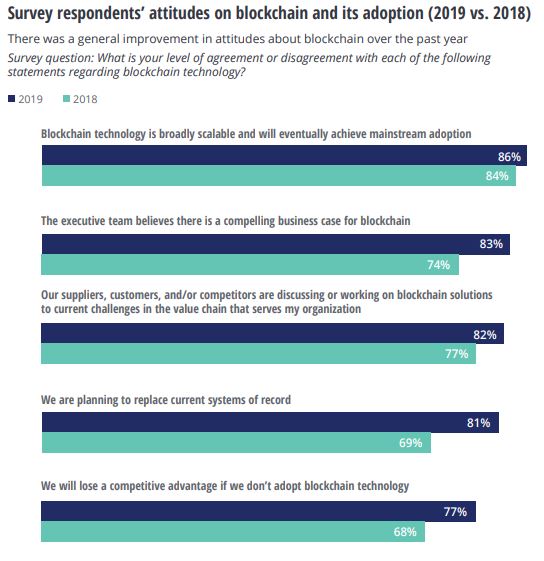 Among all those executives, 53% have responded that blockchain technology has already become a critical priority for their respective organizations this year. This actually represents a 10% increase from last year.

Another essential part of the survey came when the executives were asked about their opinion regarding blockchain’s security and potential threats. This topic records a serious improvement, as well. For instance, 39% said that they think blockchain has regulatory issues, while this year, the percentage has dropped to 30. Moreover, in 2018, 35% believed that the technology could have potential security threats, and it drops to 29% this year.

However, it’s also worth noting that not everyone appeared to be fully on board. Only 23% have responded that their organizations have already begun applying blockchain in their regular activities, while last year, the percentage was at 34.

Further Takeaways From The Survey

The survey went into other directions as well, comparing this year’s results with what executives have responded last year.

For example, it also shows blockchain’s usage among different business fields. Fintech is still the leader, but other sectors are noting increased usage as well; technology, media, telecommunications, health care, and even governments.

Furthermore, this year’s survey reveals that more organizations are willing to invest $5 million or more in new blockchain endeavors within the next 12 months.