Most of the cryptocurrency market has been trading in the red over the last 24 hours. However, altcoins are seemingly making a slight recovery when looking at the bigger picture, as Bitcoin’s dominance loses 1%.

Taking a look at the technical aspects, Bitcoin could be retesting the next significant support level at $7,000. If it breaks below, then $6,800 and $6,500 are following as the latter is also the 6-month low. If Bitcoin is to reverse upwards, the $7,400 level is now the first resistance, followed by $7,700. 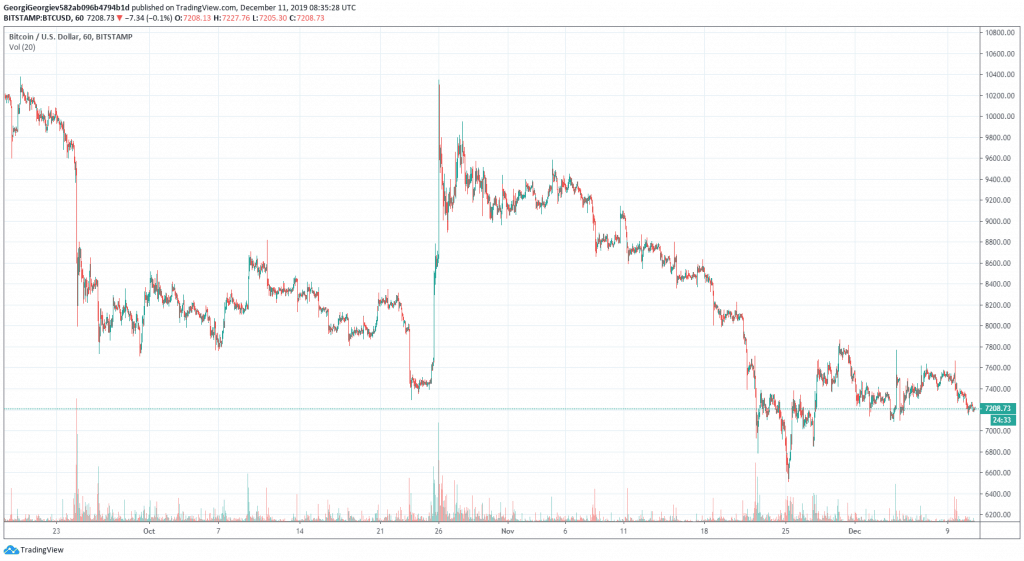 Even though most altcoins are noting small drops, Bitcoin’s dominance over the market has also decreased to 66.6% after reaching 67% last week.

The largest altcoin, Ethereum, has declined slightly with 1% over the last 24 hours, currently trading at $146. Ripple is in the same basket, while Binance Coin marks a total decrease of 2.5%.  Tezos is the only coin in the top 15 trading in the green – over 4% gain.

Ethereum’s Istanbul Hard Fork Is Now Live: What To Expect. Ethereum’s hard fork, called “Istanbul,” has been completed and is live. Being the third network-wide upgrade this year and the eight in total, Istanbul noted improvements with gas costs, added resilience against DDoS, and interoperability with equihash PoW-based cryptocurrencies.

Ukraine Set To Legalize Cryptocurrencies As Means Of Payment And Investment. The legislative arm of Ukraine, the Verkhovna Rada, has issued a report seeking to introduce cryptocurrencies as a legal means of payment and investment within the country. It represents an effort to work with the Financial Action Task Force (FATF) global standard for cryptocurrencies, and Ukraine will have to provide specific guidelines on how they will be used.

DGD is today’s most notable gainer, with 14% against the dollar and 16.5% against Bitcoin. Trading at $19.13 at the moment, its market capitalization has risen above $38 million. Earlier this month, the company published the latest updates that include two listings on new exchanges, and even giveaways on major holidays.

ENJ is next on the list with an increase of over 8% against USD, reaching $0.08. It also surges against Bitcoin with 10.5%, and it’s currently trading at 1094 SAT. With the latest price increase, the market cap is now exceeding $62 million. A week ago, the company announced a significant partnership with tech giant Microsoft, and the price skyrocketed with 60% at the time.

MATIC’s plunge continues today, as well. After yesterday’s 70% crash in a matter of minutes, Matic Network is losing another 13%, and it’s currently trading at $0.017. While the exact reason on what caused the crash has not been established yet, it appears that investors have not regained their trust and the price is still well in the red.

Click here to start trading on BitMEX exchange and receive 10% discount on fees for 6 months.