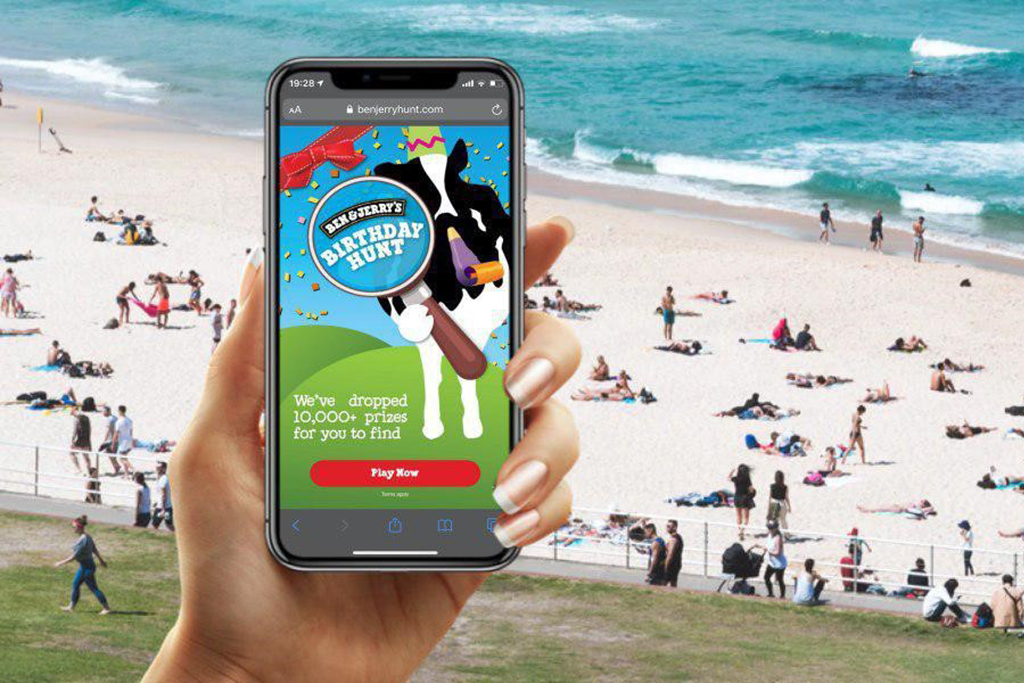 7th December, Zug, Switzerland: In an effort to deliver a new and exciting experience for Ben & Jerry’s fans in Asia-Pacific, BLOCKv and Ben & Jerry’s have joined forces to create an Augmented Reality, Vatom-powered ice cream hunt experience that will kickstart in Australia as part of its 10th birthday celebration. Fans of the beloved ice cream can enjoy hunting for thousands of Vatom prizes across Australia and in some parts of New Zealand. Participants can then exchange those Vatoms for free cones and treats, plus a chance to win a year’s supply of Ben & Jerry’s ice cream at participating stores.

Ben & Jerry’s Birthday Hunt campaign utilises BLOCKv’s Blockchain enabled digital objects technology, Vatoms (powered by its cryptocurrency “V” [VEE]) to create an interactive AR experience. From 29th November to 22nd December, redeemable Vatom treats will be dropped around Ben & Jerry’s stores in cities across Australia and New Zealand. Anyone can join the hunt on their phone’s mobile web browser, or by engaging with links on social media. There’s no need to download an app to take part in this amazing experience.

Each lunchtime, Ben & Jerry’s treat Vatoms will be “dropped” in high-footfall locations close to Ben & Jerry’s scoop shops and Hoyts cinema locations. Participants can grab these individual treats in augmented reality and take them to participating retail locations to redeem for the “real thing”. After redemption, participants will automatically be sent an instant win “grand prize draw” Vatom for a chance to win a year’s supply of Ben & Jerry’s ice cream.

“At Ben & Jerry’s, we always seek out fresh and exciting ways to engage our passionate and digitally savvy fanbase.”

“Our close collaboration with BLOCKv will help us to deliver a fun experience to our fans in Australia & New Zealand and hopefully to other parts of the region in the future.”

Ben & Jerry’s will be driving campaign engagement via social media and in-store promotion across Australia and New Zealand. Each Vatom prize is a unique and scarce digital object and high value prizes are represented on the ethereum blockchain as ERC-721 non-fungible tokens (NFT’s).

As an aspiring social justice company, Ben & Jerry’s believes in a greater calling than simply making a profit for selling its goods. The company produces a wide variety of super-premium ice cream, yogurt and sorbet using high-quality ingredients.

Ben & Jerry’s incorporates its vision of Linked Prosperity into its business practices in a number of ways including a focus on values-led sourcing. In 2015 the company completed its transition to using entirely non-GMO (genetically modified organisms) ingredients by source as well as to fully source Fairtrade-certified ingredients wherever possible, which benefits farmers in developing countries.

Ben & Jerry’s, a Vermont corporation and wholly-owned subsidiary of Unilever, operates its business on a three-part Mission Statement emphasizing product quality, economic reward and a commitment to the community. Ben & Jerry’s became a certified B Corp (Benefit Corporation) in 2012. The Ben & Jerry’s Foundation’s employee-led grant programs totaled $2.7MM in 2018 to support grassroots organizing for social and environmental justice around the country.

BLOCKv provides a development platform with a complete set of APIs, robust tools and training that enable developers to create and emit digital objects (non fungible tokens or NFT’s) on the blockchain. These objects, called Vatoms, can be obtained and viewed across any mobile device. Vatoms are highly programmable objects that store and secure digital goods and move seamlessly between users. When combined with the creativity of the BLOCKv developer and partner community, Vatoms become the experience layer to the blockchain and present a new level of human engagement.