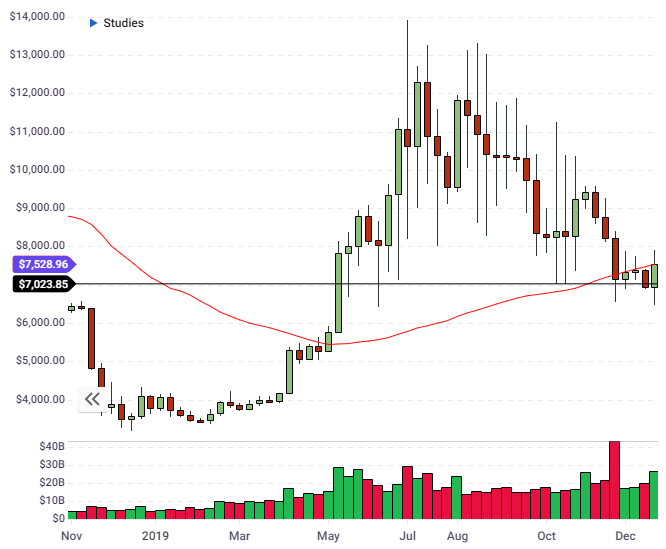 Bitcoin is holding a key support level at $7,000 after an early week dip was followed by a stick save by the bulls and a strong Monday rally. I noted in last week’s article that,

The market needs to rally above the $8,000 level to avoid posting further losses into the year-end.

The early week drop gave us those lower prices and could’ve led to a bearish year-end but the bulls look to have rescued the situation. The resistance in BTC is in the $7,500-8,000 level and a 4.5% rally to start the new week could see a healthy close for the weekly chart. The 50 moving average and the 61.8% Fibonacci support are also near this level so this will be a defining moment for the cryptocurrency market and will show the path ahead for Q1 2020. 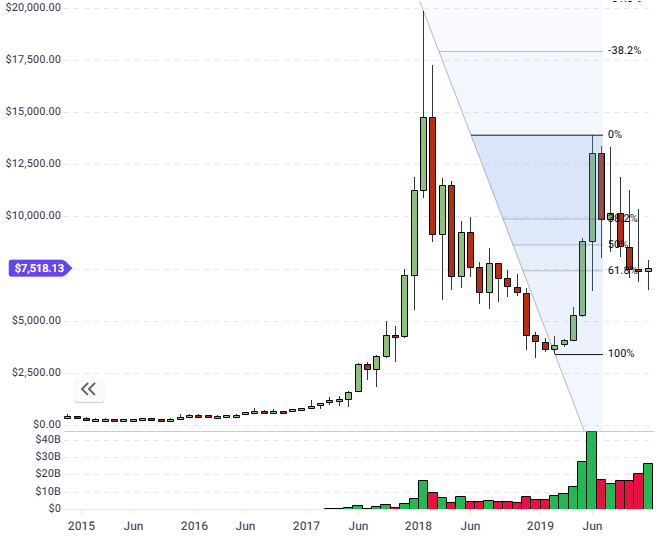 On the monthly chart, BTC would put in a small bullish hammer with a hold of the 61.8% support level mentioned and this could be a key low for the market going forward. In a previous article, I mentioned that the U.S. Federal Reserve had been injecting liquidity into the interbank lending or REPO market and it was recently announced that they would ramp this up to $400 billion for December 31st when banks traditionally need short-term financing.

These efforts are a sign that there is friction in the bank-to-bank lending arena, which is the same problem that felled Bear Stearns and Lehman Brothers. When banks are afraid to lend to each other, interest rates spike, as we saw in late-September. The year-end will be an important time to see how the market behaves. The potential for a bullish year-end close for BTC could signify that it is positioning for gains next year and the financial system stress could be a driver of this.

A rally for BTC into the year-end would lift the cryptocurrency market but I looked around to see which coins were showing a similar support setup. TRX is another coin that is holding a key support level on the weekly chart. 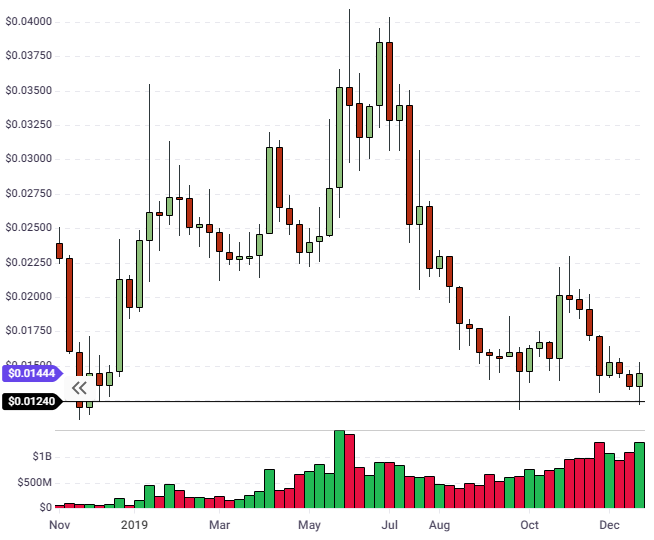 The monthly support for TRX is also at the $0.1250 so this is a big level for the coin if it can hold onto these gains. The rally in BTC has lifted the cryptocurrency market and TRX is up 2.5%.

Ripple has announced a $200 million funding round that values the project at $10 billion. Global investment firm Tetragon has invested the money to assist Ripple in its push for the development and adoption of its ledger technology.

We are in a strong financial position to execute against our vision. As others in the blockchain space have slowed their growth or even shut down, we have accelerated our momentum and industry leadership throughout 2019.

Ripple has seen a strong 2019 as the payments network grew to more than 300 institutions and they also signed a strategic partnership with global payments network Moneygram. Ripple saw 10x year-on-year growth in transactions over the network. 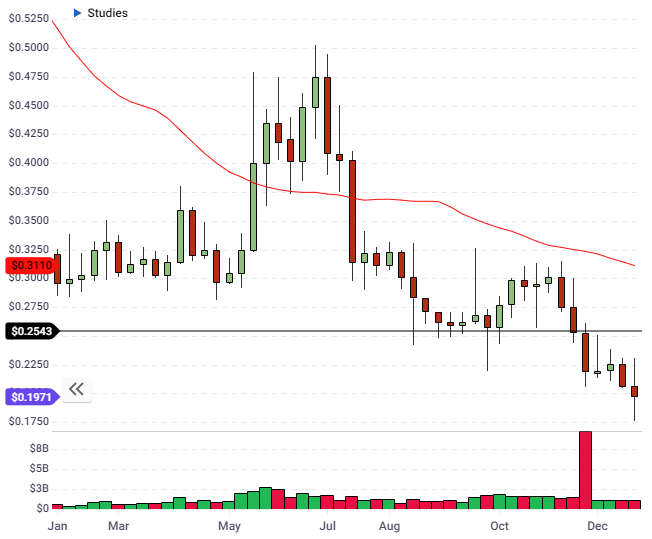 The price of XRP broke lower through a strong support level from 2019 and now trades around $0.200. The key resistance is that level at $0.250 and the 50 moving average comes at $0.300-3200. The market cap of XRP is currently $8.5 billion and the coin trades at number three on the list of coins. The recent fundraising is at a slight premium to the current levels but the funding should pave the way for further adoption in 2020.

ETC is another coin that is holding support levels on the weekly and monthly charts. Ethereum Classic trades at $4.21 and has a market cap of $489 million, which is a large discount from its peer, ETH, which has a value of $14 billion, so ETC could provide some value moving forward if ETH is adopted further. 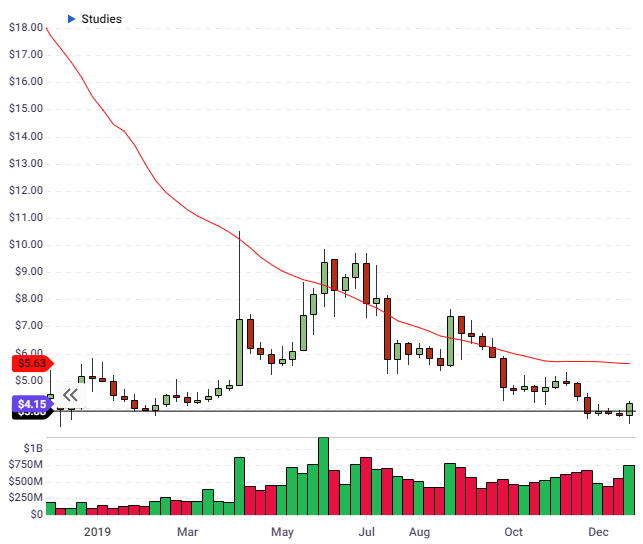 The ETC ledger is untouched since the hard fork from Ethereum in 2015 and the project states that it is “one of the purest projects in the crypto space” based on this dynamic. The project has since positioned itself for smart contracts, whilst the larger project is moving ahead with its ETH 2.0 movement.

Resistance for ETH is at the 50 moving average near $6.00 and a weekly close near that level is needed for further gains, with the 2019 highs of $10.00 being an obvious magnet for price. 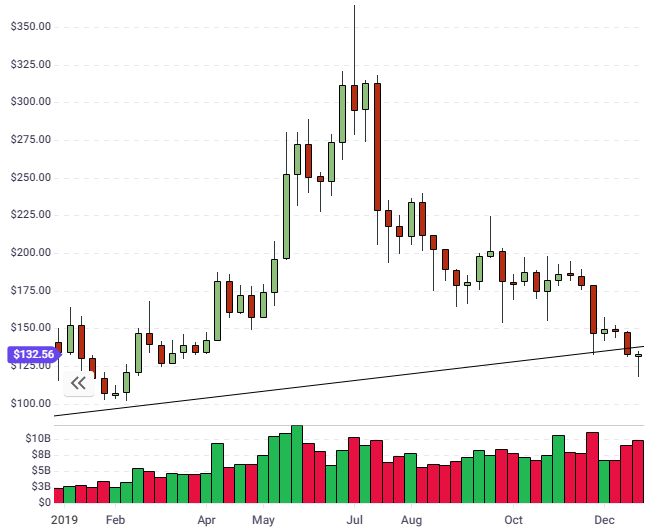 ETH has corrected more of its 2019 gains than Bitcoin, which makes it less technically appealing, however, that may provide a significant value trade as the project moves towards the 2.0 upgrade. Bitcoin’s appeal has been driven by institutional involvement and greater infrastructure, such as a futures trading market. The Bakkt exchange was one that previously noted they would consider non-Bitcoin futures, “as the landscaped evolved”. 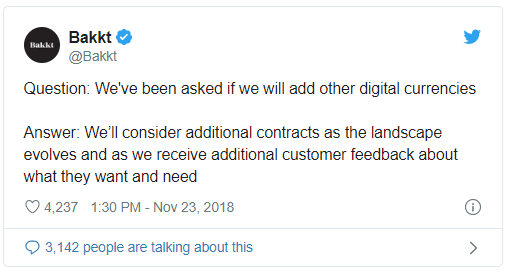 ETH is trading at multi-month lows because of this dynamic and it would be a value proposition to consider rotating some BTC out into ETH, or other altcoins after periods of BTC dominance. 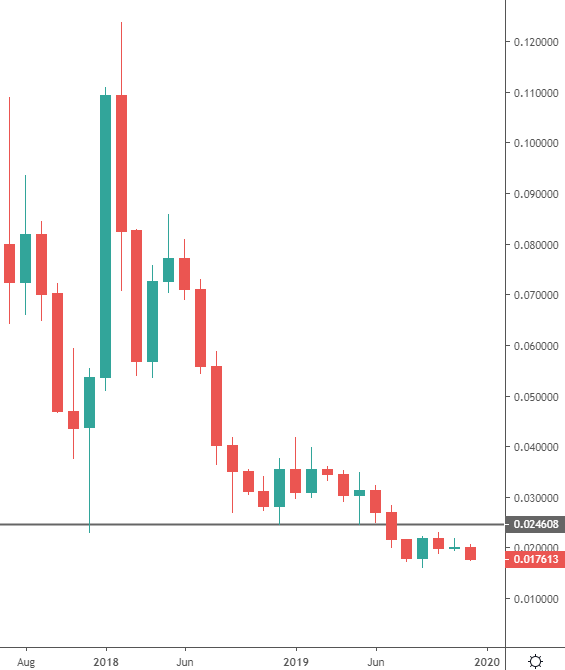 The strong rally by Bitcoin to the key resistance of $7,500 is a sign that strong support was provided at $7,000 and the weekly and monthly charts may be positioning for further gains in Q1 2020. January is always a time of “position squaring” for investment firms, where profits or losses are booked in order to provide a clean slate for the yearly performance statistics. That may have been a driver for Bitcoin’s rally from January in 2019 and the same dynamic may appear this year. The growth in institutional trading exchanges and custody would make this easier for companies to get involved. We must also keep an eye on the Federal Reserve’s December 31st REPO market developments as signs of stress in the traditional finance system could provide safe-haven flows into the cryptocurrency market.