2019 is coming to an end but people in the Bitcoin community are still holding their breath, as the volatility has been off-the-charts lately for the largest digital asset.

Since the start of November,Bitcoin has registered a change of over 30 percent in its valuation and the market witnessed several short-term hikes and detrimental falls during the last 5 weeks. Other assets were evidently affected as well and the industry is currently bracing for another surge or crash before the year ends.

Over the course of 2019, Bitcoin futures and options trading have received prominent attention from various financial institutions, as ICE’s Bakkt also ended up launching their own physically settled Bitcoin futures.

However, according to skew markets, the total open interest on the CME BTC futures recentlytouched its 6 monthly low last week. The total open interest has been decreasing over the past few months since spiking highly mid-year, however, the recent low point can indirectly suggest that another massive crash may not be on the cards for Bitcoin. 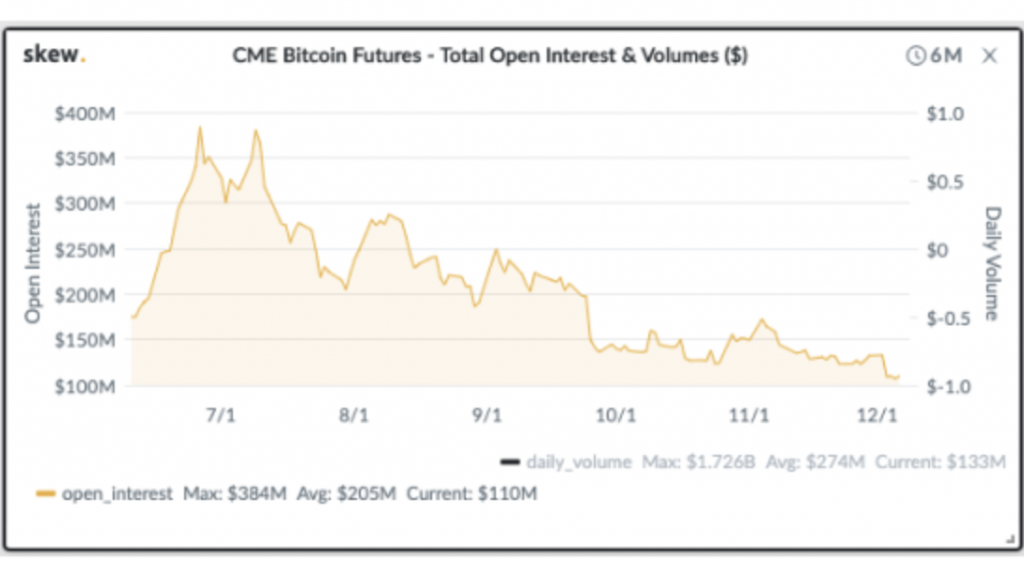 On 3rd December, the open interest volume recorded was around 109 million and the daily volume was about 65 million. A decreasing open interest and volume also indicated the exit of investors from the space, suggesting stalled adoption.

On the contrary, despite a decline in total interest, according to coinmetrics.io, the total number of Bitcoin addresses that held more than 0 BTC reached an all-time high of 28.39 million addresses, surpassing its previous ATH of 28.38 million addresses.

Although the number of addresses occupying BTC can be an inaccurate metric at times as it may overcount the total number of individual Bitcoin users, as one person may be responsible for multiple addresses.

“While not perfect, the “addresses w/ any balance” metric is one of the best on-chain metrics we have for approximating the total number of bitcoin users, and its increase over time can be be viewed as an indicator of growing bitcoin adoption.”