Ever since its launch last year, Tezos has done quite a lot to improve its feats and keeps on doing so. As the company appears to continue with innovations and partnerships, some of the community is arguing that Tezos might be skyrocketing soon, resembling Ethereum’s surge from 2017.

Is Tezos The New Ethereum?

2017 was arguably the most intriguing year among all cryptocurrencies. While Bitcoin’s price skyrocketed to almost $20,000, Ethereum made a remarkable performance, as well. It started the year at around $8, and reached its all-time high of over $1400 in January 2018, thus becoming the second-largest cryptocurrency by market cap. This notable increase meant that in a little over a year, ETH recorded a total price increase of 17400%.

The cryptocurrency community has been looking out for a successor since then, as Ethereum seems to be on a downtrend, currently trading at $150. While a few other similar projects have been previously named as the “New Ethereum”, no one managed to fill the shoes.

However, it appears that the community now believes Tezos (XTZ) will fit the description best. Both of them represent blockchain protocols providing a platform for the creation of smart contracts and decentralized applications.

Tezos was introduced last year, and it has recorded interesting price movements so far. It briefly reached $2 upon its release, then followed the market firstly to $0.31 in January this year, and then surged in June to $1.85. While moving with the market could be considered as normal, XTZ has recently been outperforming most cryptocurrencies. In fact, Ethereum was doing something rather similar back in 2017; hence, the beginning of the comparison. 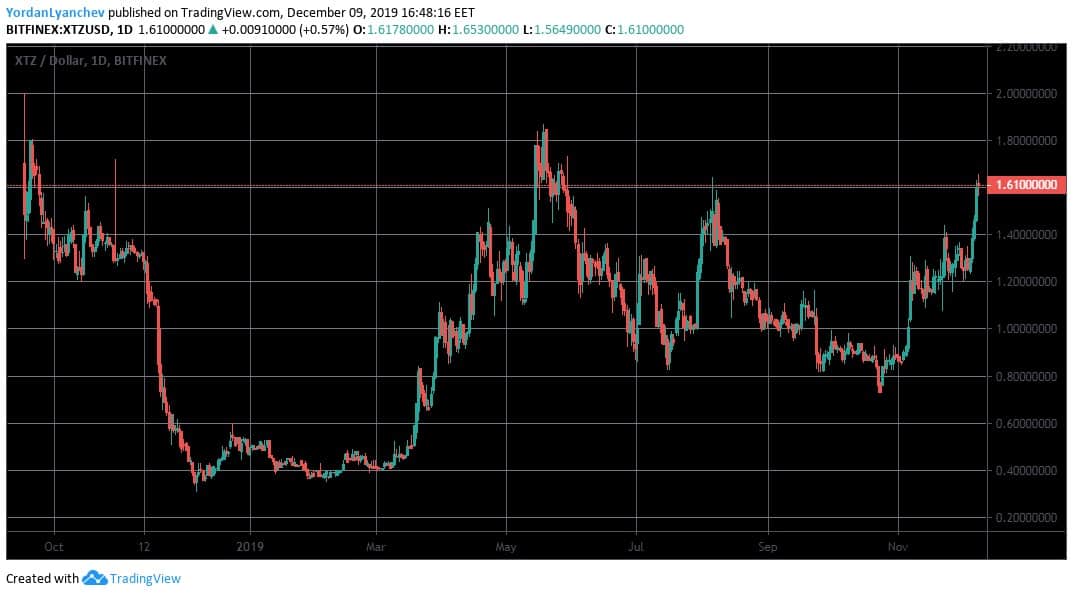 Some people seem to think that Tezos may be still in its accumulation zone, and the most significant price surge is yet to come. One generous prediction indicates that XTZ will begin its significant ascend by hitting $10 in January before skyrocketing even further. As the current price is at around $1.62, reaching $10 would mean a 500% increase, which sounds somewhat unlikely at the moment.

Tezos is not staying quiet with upgrades and partnerships coming frequently. Moreover, it appears that the price is following any significant news from the company tightly.

A month ago, the largest U.S.-based cryptocurrency exchange, Coinbase, announced that users will be able to stake XTZ on their platform and receive rewards for it. This time the price simply skyrocketed with over 70% in a matter of hours.

Binance also introduced XTZ staking, and when the announcement came adding that it will be with zero fees, Tezos spiked with another 8%.