Chris Hurt introduces the program, stating first that he’s been able to learn his financial technique from “some of the most dynamic and sought-after minds” in this industry. In today’s video, Hurt met up with Doug Casey, who he describes as “a multi-millionaire and legend of the resource market,” to discuss gold, bringing up that the price for a single out has continued to beat the S&P 500 consistently for nearly two decades.

Hurt states that there are billions of dollars leaving the cryptocurrency markets and other speculative investments in search of a specific aspect of the gold market. He quotes Sam Zell, a 77-year old billionaire who said, “For the first time in my life, I bought gold.”

One of the questions that arises in this video is “why now,” and Hurt promises that his guest will “shock” the audience, again focusing on “one small niche of the gold market” that tends to catch momentum during bull runs. He again introduces Dough Casey, who has written over half a dozen books, along with Crisis Investing. During Crisis Investing, Casey predicted a crisis that will soon reach the public, encouraging readers to purchase silver and gold before the price goes up.

Through the interview, Hurt asks Casey about the history of gold, going through the many changes from the government. He even discusses the decision by the Roosevelt administration to force Americans to give up their gold, threatening the public with jail time. The ban was ultimately lifted by President Gerald Ford in 1974, causing the price of gold to skyrocket.

Now, Casey believes that the gold market will see a surge in price again.

The upcoming change that Casey brings up is Basel III, which he describes as a “major change in the way central banks value gold.” He states that it is a banking protocol that was written by a bank in Switzerland and compares its importance to the official policy that legalized gold ownership over four decades ago.

During the interview, Casey refuses to “go into the full details,” stating that they are more “complex” than watchers may understand. However, he points out that the US dollar could easily lose value, adding that a crisis reaching the US isn’t as unlikely as consumers may think, proving his point by asking the host to name a fiat currency that has been able to maintain its value over time. As Hurt throws out the British pound and the dollar, Casey contradicts the statement, showing the way that a single dollar or pound can’t purchase what it used to.

Despite the interview seemingly being about the technique, Hurt interrupts the interview, stating that Casey prefers not to discuss the financial dealings of his personal life on camera. However, he states that the Casey Method’s success has already been a topic of interest in Forbes, US Weekly, the Washington Post, and other publications. When asked about his approach, Casey stated, “It’s impossible to go into detail in a brief interview.”

Still, he states that his “method of attack” is referred to as “the 9 P’s,” but adds that the interview “isn’t the time to go into them.” However, this platform gives him an opportunity to offer a chance to purchase “The Doug Casey Method to Investing in Gold Stocks.”

The Doug Casey Method to Investing in Gold Stocks

Consumers are able to get a free copy of The Doug Casey Method to Investing in Gold Stocks to learn more about the efforts that he describes in the interview. According to the information by Hurt, consumers will learn:

Consumers will also have other content provided to them through this collaboration between Hurt and Casey, including “The 2020 Gold Spike Action Plan: Make 10x From the Biggest Gold Bull Market in Decades.” 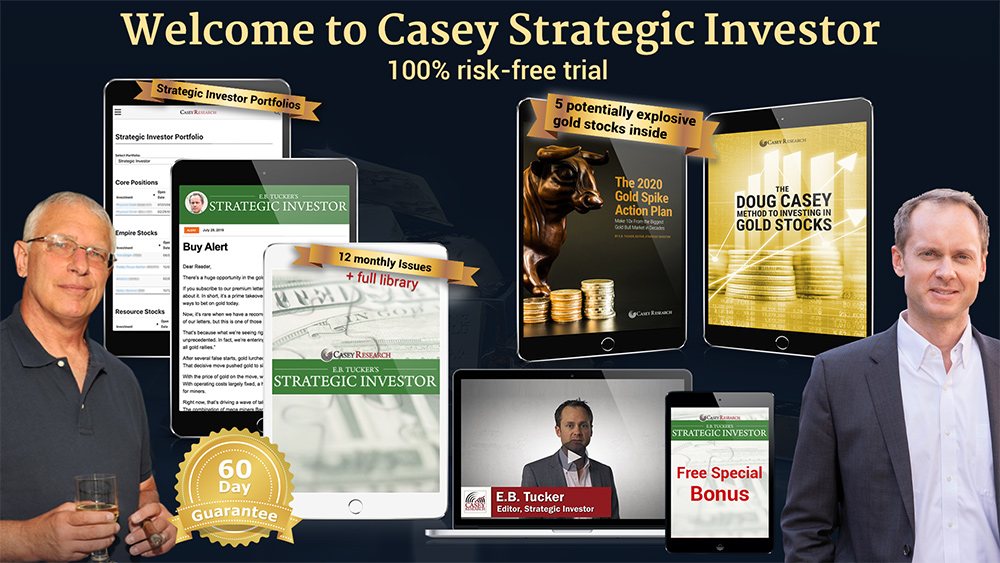 While consumers can get free access to the materials, they are required to sign up for a risk-free trial of Strategic Investor, a monthly newsletter by Casey’s protege E.B. Tucker. Presently, there’s an offer that allows consumers to get a year of this subscription for $49, which is a 75% discount from the $199 annual rate. Consumers that act today to make this purchase will have up to 60 days to relinquish access for a full refund. The sign up for the subscription can be accessed from the same page as the video.

The website offers a lot of preliminary information to entice customers. However, if consumers have additional questions, they can reach the customer service team of Casey Research by calling 1-888-512-2739.