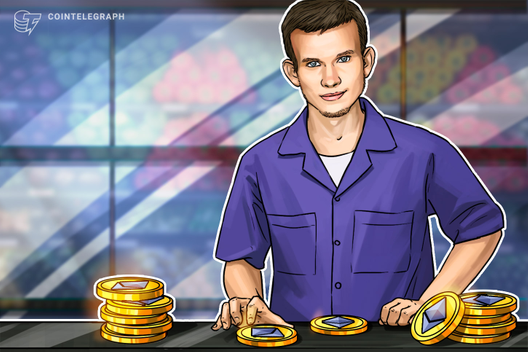 Ethereum (ETH) co-founder Vitalik Buterin became the center of attention on Christmas Day amid fears he plans to sell $25 million of the cryptocurrency.

Records from monitoring resource Etherscan showed a total of 92,000 ETH (currently worth $11.5 million) move from a single wallet to U.S. exchange Kraken on Dec. 25.

As noted by blockchain analytics service ViewBase, the wallet contained over 300,000 ETH before the transaction and received most of its content from Buterin several years previously.

“The whale is likely an ETH dev or VB himself,” it summarized in accompanying comments.

The transaction formed one of three major movements to exchanges which triggered in quick succession. Huobi gained an extra 99,987 ETH, while another 25,908 ETH went to Binance.

The total value of the three transactions is $25.5 million. Responding to ViewBase, commentators immediately raised concerns that Buterin or an associated investor was planning a major sell-off.

Buterin has not participated in the discussion, which forms the third round of rumors regarding an ETH liquidation in recent days.

In an interview earlier in December, Buterin revealed he personally orchestrated the sale of $70,000 ETH in 2018, when the altcoin was trading around its all-time high. The proceeds were worth $100 million.

As Cointelegraph reported, last week, a 789,000 ETH transfer between two wallets known to be controlled by the Ponzi scheme PlusToken triggered further concerns.

The mood among pundits has become increasingly hostile towards Ethereum as 2019 draws to a close, developers earning scorn for their management of the network’s major update roadmap.

The largest altcoin is undergoing two hard forks in a matter of weeks, something well-known Bitcoin (BTC) supporter Udi Wertheimer has described as “absurd.”