Let me tell you a story about Wally Whale.

Wally bought 125 bitcoin back in the day, when the price was just $125. Those 125 bitcoin are now worth $1 million and Wally can’t handle the stress. He’s tired of HODLing a million dollars of bitcoin, which might be worth half a million one day and two million the next. He wants to diversify.

In other words, Wally would like to sell the bitcoin and reinvest the $984,000 profit in a more traditional, stable investment—say, real estate. But this means he will have to pay tax on the profit, which will be around $200,000.

What if I told you there was a way to reinvest your bitcoin into real estate, completely tax-free, with the government’s blessing?

Because this works with new U.S. tax law, it is only applicable to U.S. investors. But for all the bitcoin skeptics out there, this is a perfectly legal, government-sanctioned way of transferring your bitcoin to something “real” – real estate.

The Tax Cuts and Jobs Act of 2017 was created to spur investment in economically distressed areas—to “spread the wealth” into regions that need more businesses and investors, by providing them with a huge tax advantage. They gave these areas the sexy name of “Opportunity Zones” (or the even sexier “O-Zones”), and the payoff is exciting. Stick with me to the finish.

Normally, if you sell any asset for a profit, the IRS takes a cut of that profit. If you bought Apple stock five years ago at $109, and you sell it today at $262, the IRS gets a cut of your $153 profit. This applies to any asset, whether it’s fine art, a classic car, or bitcoin. If you make a profit, you pay tax on the profit.

Under the new law, you don’t pay tax if you reinvest that profit back into one of these new “Opportunity Zones.” Let’s say you sell your Apple stock, then reinvest the $153 back into Parramore Oaks, an energy-efficient apartment building in Orlando, Florida. You roll over the entire $153, and you don’t pay tax.

This is what an O-Zone looks like (courtesy NCSHA).

Let’s go back to Wally Whale, who has made a $984,000 profit on his original purchase of 125 bitcoin. He sells the bitcoin, rolls over the $984,000 tax-free into, say, the Teachers Village Fund, which invests in schoolteacher housing within Opportunity Zones in Newark, NJ.

If Wally cashes out of that investment after five years, he only then pays the tax, at a 10% discount. If he cashes out after seven years, he gets a 15% discount. He pockets his $800,000 and change—a jaw-dropping return on his original $15,000 bitcoin investment.

Obviously this works best for investors who are willing to be patient and do their homework (both things that we preach over and over at Bitcoin Market Journal), but it’s a terrific way of building wealth while helping build underserved communities. By converting digital assets into real estate, you’re moving blockchain into buildings, crypto into communities.

I had the opportunity to go visit one of these communities. I was impressed with what I saw.

Quincy is one of the top 10 cities in Massachusetts, with easy access to Boston: it’s just a twenty-minute subway ride into Boston’s Blockchain District (formerly known as our Financial District). The Stop & Shop supermarket chain is headquartered there, as are major offices of State Street Corporation and Blue Cross Blue Shield. John Adams, the second president of the United States, grew up there. (Don’t hold that against them.)

Traditionally, Quincy was a manufacturing town, with granite quarries and shipbuilders. When those businesses dried up, Quincy went into a bit of a decline. In 2013, the median household income was about $62,000—well above the national average of $53,000 but well below the local average of $85,000.

The local government began investing heavily to attract businesses out of Boston and into Quincy, where rents were much more affordable. It invested in new housing, gentrified the downtown area, and attracted new restaurants and shops, creating what the Patriot Ledger newspaper (also headquartered in Quincy) called an economic boom.

Walking through Quincy, you don’t exactly feel like you’re in a wealthy suburb, but it’s not bad. We had a nice lunch at an upscale Japanese restaurant, then took a tour of a new co-working space called QUBIC (Quincy Business Innovation Center), located beneath a huge Citizens Bank branch (one of the conference rooms is literally an old bank vault). You can see Quincy profiting from the Boston boom.

The Bank of America building in Quincy Center.

Quincy is also home to these “Opportunity Zones.” So, if Wally Whale believes that Boston is growing (it is), and this growth is pushing out to the suburbs (it is), and Quincy is well-positioned geographically and politically to take advantage of that growth, then this is an Opportunity Zone well worth consideration.

Let’s say Wally sells the bitcoin, reinvests the profit in new real estate development in Quincy (it has to be either new construction, or “significant improvement” to an existing property), and sits on it tax-free for seven years, during which time it benefits from the Boston blockchain boom. Wally gets a more stable investment (real estate), helps build a local economy (Quincy), and enjoys his free money (tax discounts and deferrals).

The ancient alchemists sought to turn metal into gold: Wally is turning bitcoin into buildings.

Please note I am not endorsing any specific investment or city. I’m literally not selling you anything! I am using Quincy as an example of how an investor might think about 1) diversifying investments, 2) doing the homework, and 3) investing for the long term. I’m giving you ideas.

Now, what if we could take this approach to invest in not just one piece of real estate, but to an entire portfolio of properties? That’s our final piece of the puzzle. 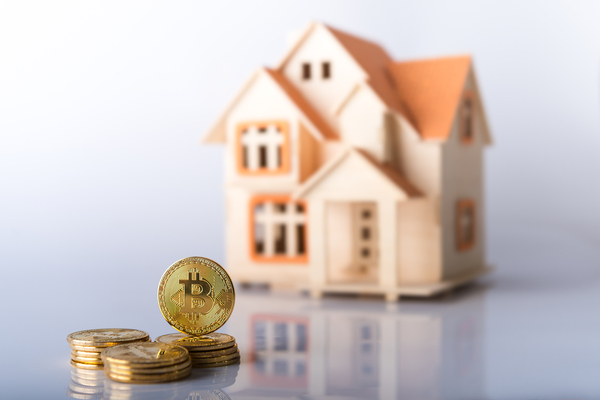 Imagine that Wally Whale can now reinvest his profit into a fund that has investments in buildings across the United States, strategically located in promising Opportunity Zones like Quincy. For example, the fund might invest in Ox Fibre Apartments, a historic warehouse in Maryland that’s been converted into residential units. Or The Tappan, a mixed-use building in Cleveland, OH with 95 apartments and a 2,000 square-foot bakery. Anywhere there’s the promise of future growth.

There are already over 150 of these Opportunity Zone Funds, many of which are open to anyone (not just accredited investors). In other words, anyone can cash out a bit of bitcoin, then reinvest it back into one of these funds, tax-free. You can convert bitcoin into buildings.

That’s why this law was passed: to attract investment to these underserved areas. The government doesn’t care where that money comes from. And by offering another place to park your money, you diversify your portfolio, always keeping no more than 2-10% in digital assets, as we explain in our Investor’s Manifesto.

The only thing that hasn’t been done yet is to formalize this with a name. While you can sell your bitcoin or cryptocurrency, then reinvest the profit into any of these funds, I’d love a fund called the “Bitcoin Real Estate Fund,” specifically targeted to investors like us.

In this hypothetical fund, we’ll invest in real estate projects in promising Opportunity Zones located near technology hubs like San Francisco, New York, and Boston – or in promising blockchain hotspots like Wyoming, Miami, and Puerto Rico. In a sense, we’re getting the best of both worlds: betting on the rise in technology, which will in turn lift the value of the surrounding real estate. Anyone can invest, but we’ll make it an easy “off-ramp” for people who want to cash out bitcoin and into real estate.

I am grateful to the Boston blockchain angel investor group Chain Reaction for explaining Opportunity Zones at an excellent Meetup, and for arranging the tour in Quincy. With this idea, we can literally power a new real estate revolution with bitcoin, in the places that need it most. That’s doing well and doing good.

We can convert bitcoin into buildings.

Subscribe to Bitcoin Market Journal to learn more about investment opportunities in the blockchain industry.