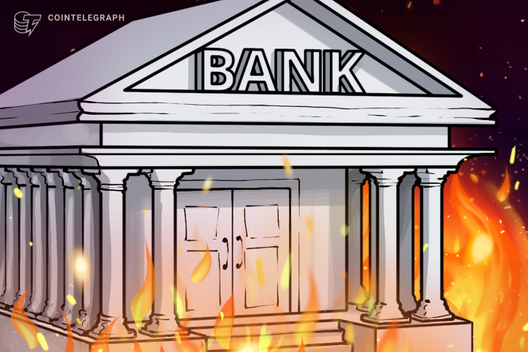 Iranian protesters have set the building of the Central Bank of the Islamic Republic of Iran in the city located in the city of Behbahan on fire, as the cryptocurrency community closely follows the developments.

The official twitter profile of libertarian media company BeingLibertarian published a video of what is presumably a branch of Iran’s central bank in Behbahan, in the southwest of the country, being set on fire amid protests. Interestingly, the reaction to the tweet was overwhelmingly positive, with one user saying:

“We might consider trying that here!! More effective than trying to audit it.”

While one user answered with the single word “Bitcoin” to the video posted on Twitter, the presence of the cryptocurrency community is seemingly limited among those following the events.

Still, a link to the tweet has found its way onto the Cryptocurrencies and Bitcoin subreddits. The post was then upvoted by 78% in the first and 64% in the second communities.

News outlet dedicated to Islamist movements ThePortal reported on Nov. 16 that the building was set on fire amid ongoing demonstrations against the government’s surprise decision to ration petrol and increase its price by over 50%. Iranian President Hassan Rouhani defended the measure claiming that it is good for the local population.

In the city of Sirjan in central Iran, the protesters also tried to set a fuel warehouse on fire as well. Per the report, state media claim that one civilian was killed and several others injured and the demonstrations ended by midnight.

As Cointelegraph reported in July, the United States is seemingly motivated to impose sanctions on Iranian cryptocurrency mining operations.