I used to design data centers ( I became a full time crypto trader) and I got very concerned when i saw them using tech i am very familiar with to try and steal peoples money via liquidations.

Trading leverage is risky but to for a company to game the system with thier data center design is just not ok.

below is a screen shot of Kucoin denying access to the website on peak times using Cloudflare.

Cloudflare is used for 2 purposes. To stop a DDOS attack ( millions of bots refreshing a web browser to crash a server) and to defer traffic to redundant servers when server loads peak.

Essentially they are treating all their customers like a DDOS attack and saving money on not having a redundant webserver at AWS ( Amazon Data centers). 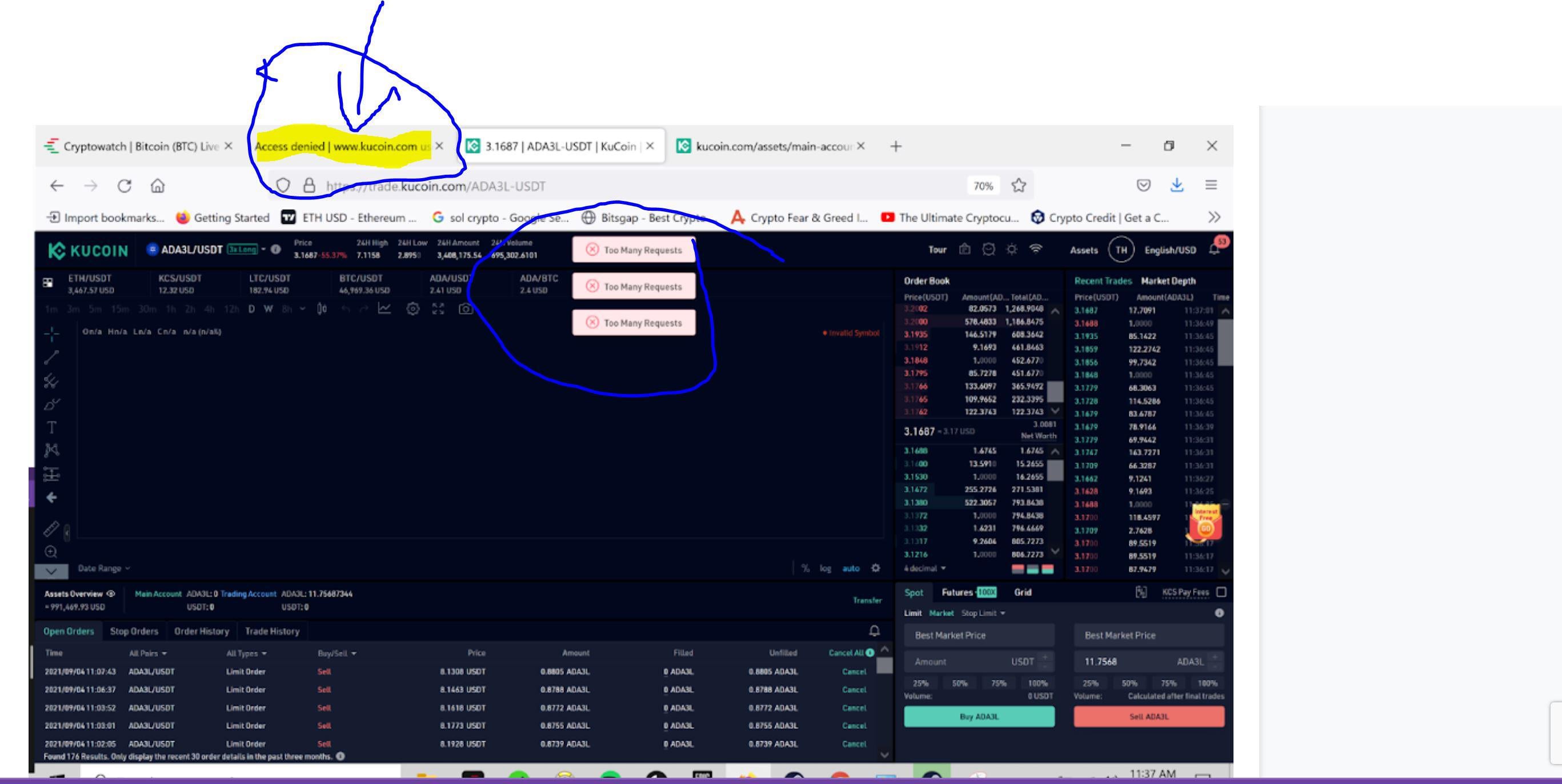 When I asked about this on Kucoin i was insta banned 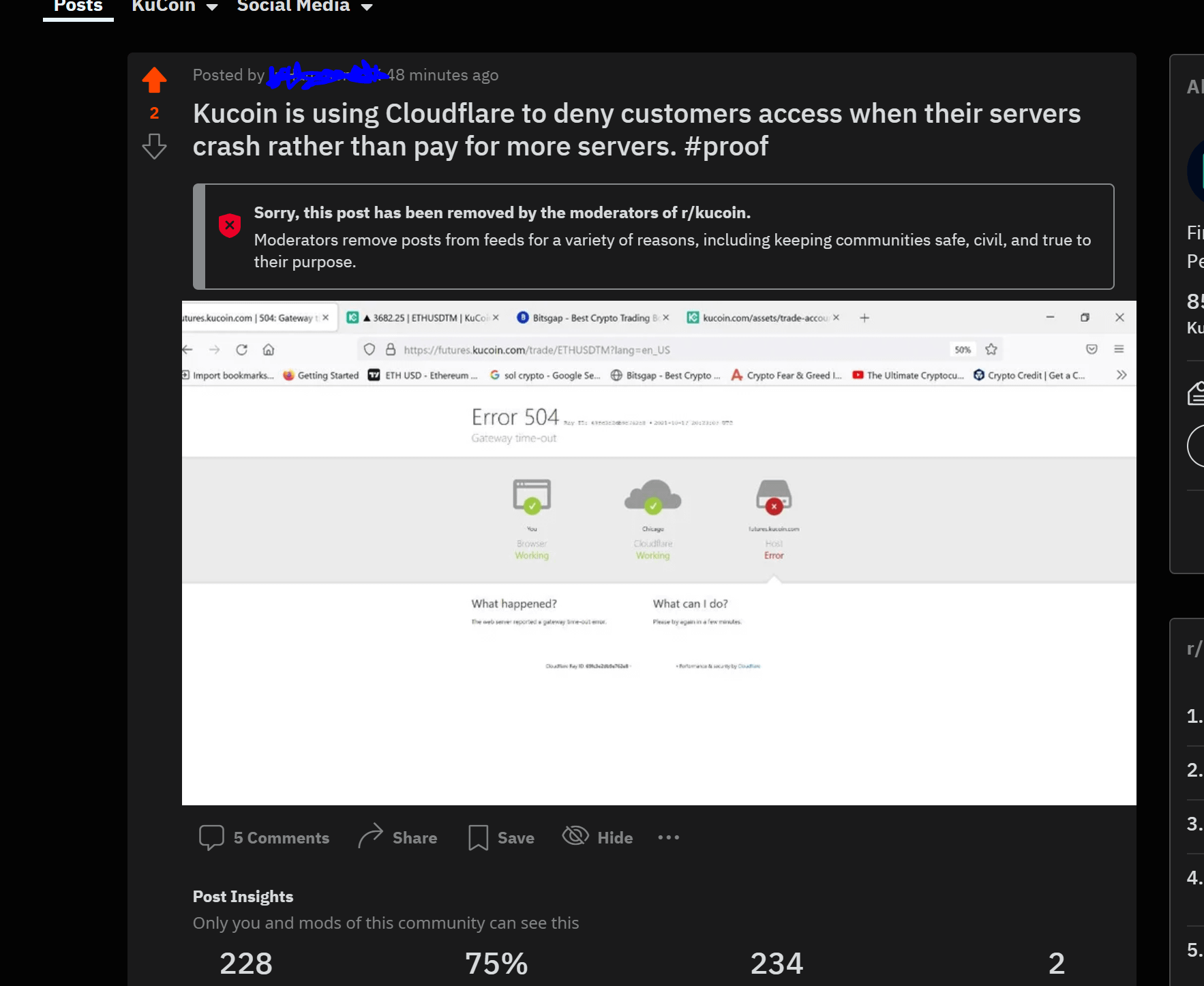 If I was wrong I figure someone would at least talk to me about it.

but when i add this server denail access stuff on top of little nuansces like them removing the liquidation price on margin to increase customer risk I got more concerned.

Their servers are going down way too often as well https://downdetector.com/status/kucoin/archive/

Essentially by not spending more on IT they make more money.

Kucoin is assigned a Cloudflare Ray ID, an identifier like a phone #. Kucoin ray id 69fc3e2db9e762eB

Kucoin uses Amazon Data centers or AWS, they could recitify this whole issue by using geo load balancers aka a gateway load balancer

Instead they let the servers go down and get laggie to make extra money. They save money on IT and make money off liquidations

Roughly 5% of their revenue comes from liquidations.

Helpdesk wont even acknowledge this; I designed data centers, I know how this works for anyone who has questions

I posted this on the Kucoin subreddit and “no surprise” I was banned.

I went and grabbed the following off their moderator list

This is thier executive team and one developer

The big question is do they know about this

I personally PM’d the CEO u/johnny_kucoin and he responded 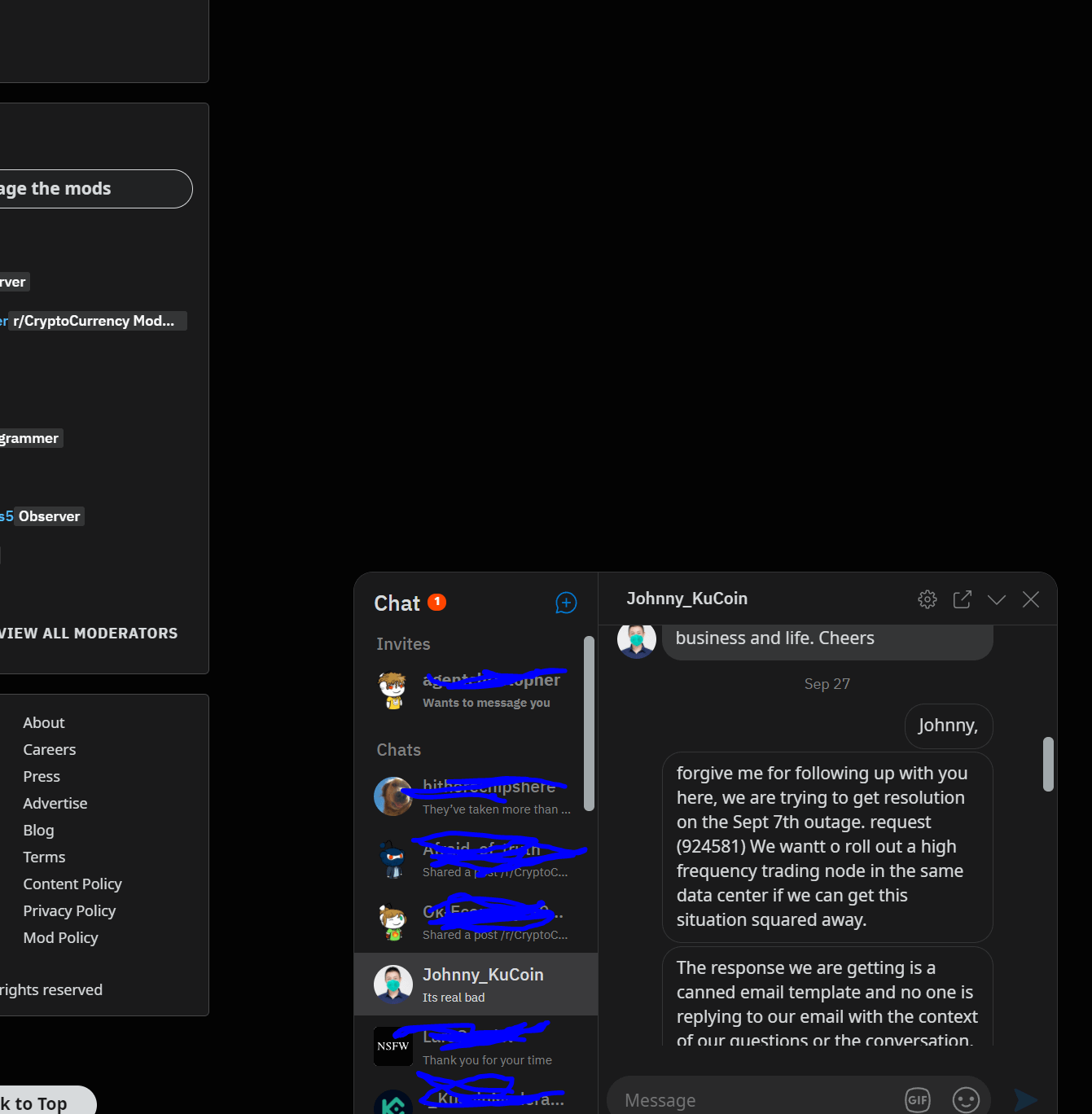 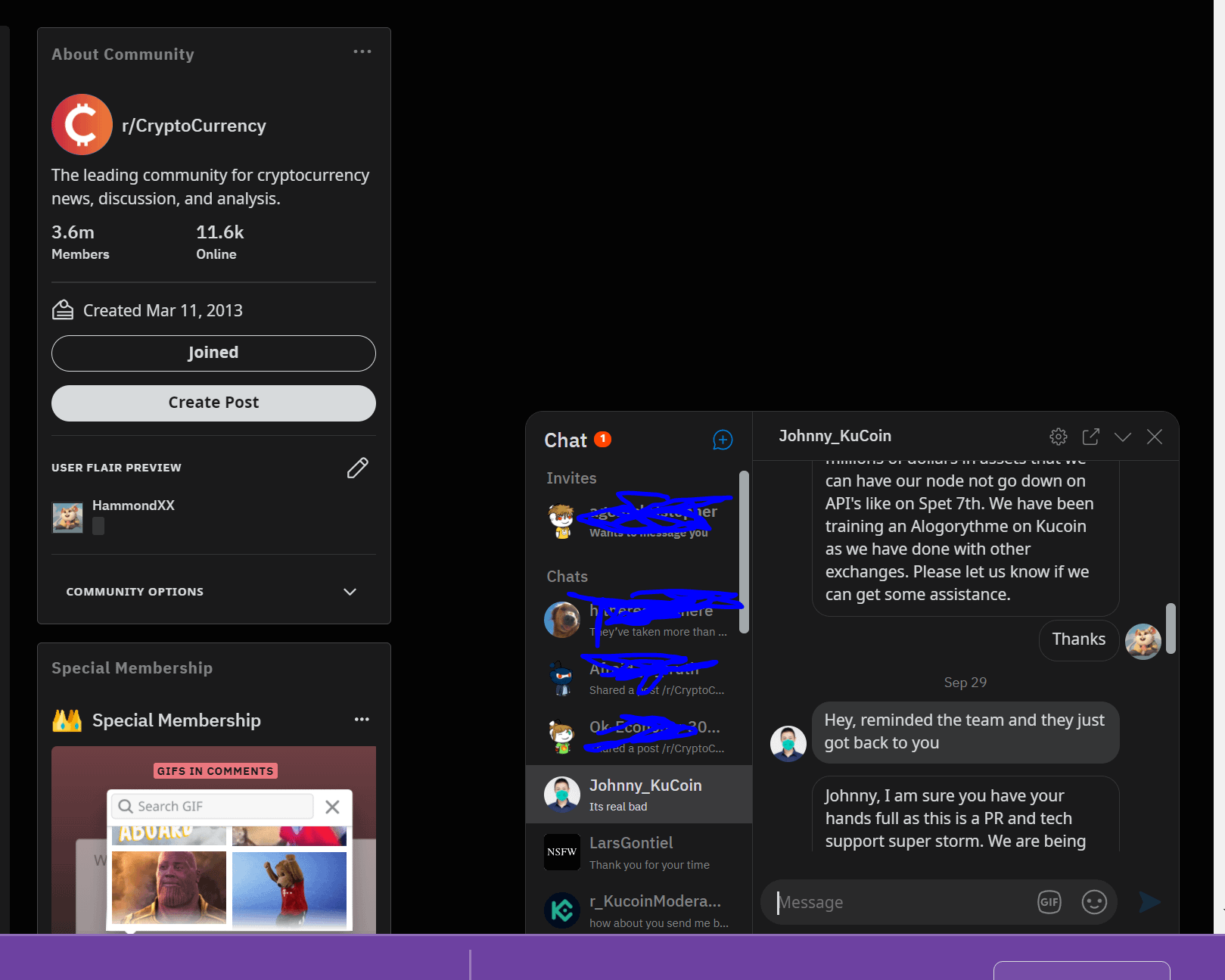 How else do they know ( they are knowingly doing this)

How this works is Amazon data centers charges you by the cumulative resources you consume. ( cpu, gpu, data storage, ram etc)

In these settings you can throttle the virtual machine/ cloud servers resources forcing it to go down. I am not implying that they are doing this.

If you dig through this archive you can see when outages are being reported. They get a system notice that they hit a threshold of resource utilization.

Now in the event, you have a crazy anomaly Cloudflare and Amazon have the ability to redirect to a redundant location with a technology called geo load balancing

They VERY MUCH KNOW THEY ARE DOING THIS

Infact I let the CEO know via PM 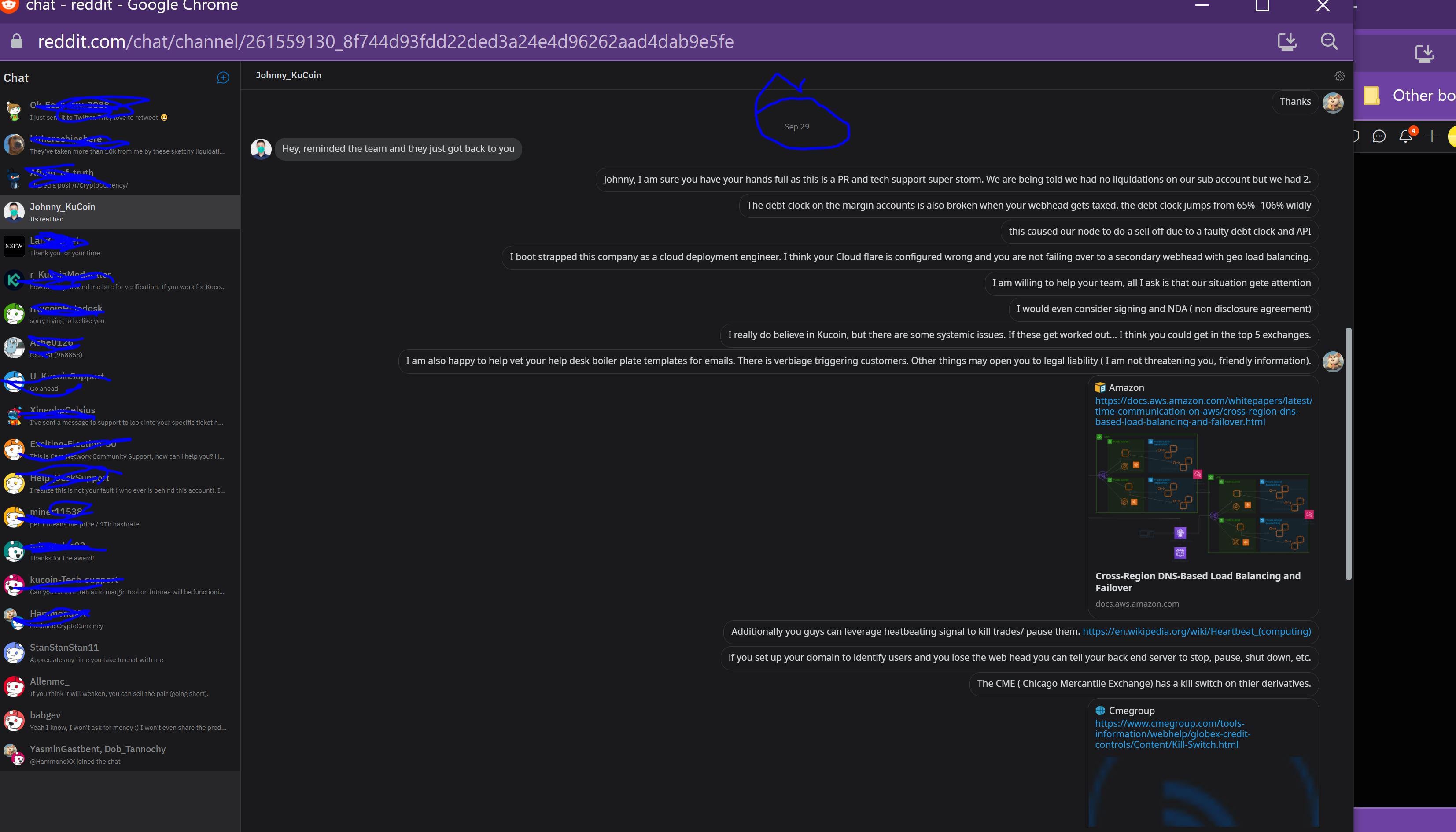 the date on that PM is Sept 29th

They had another outage this past weekend and even today 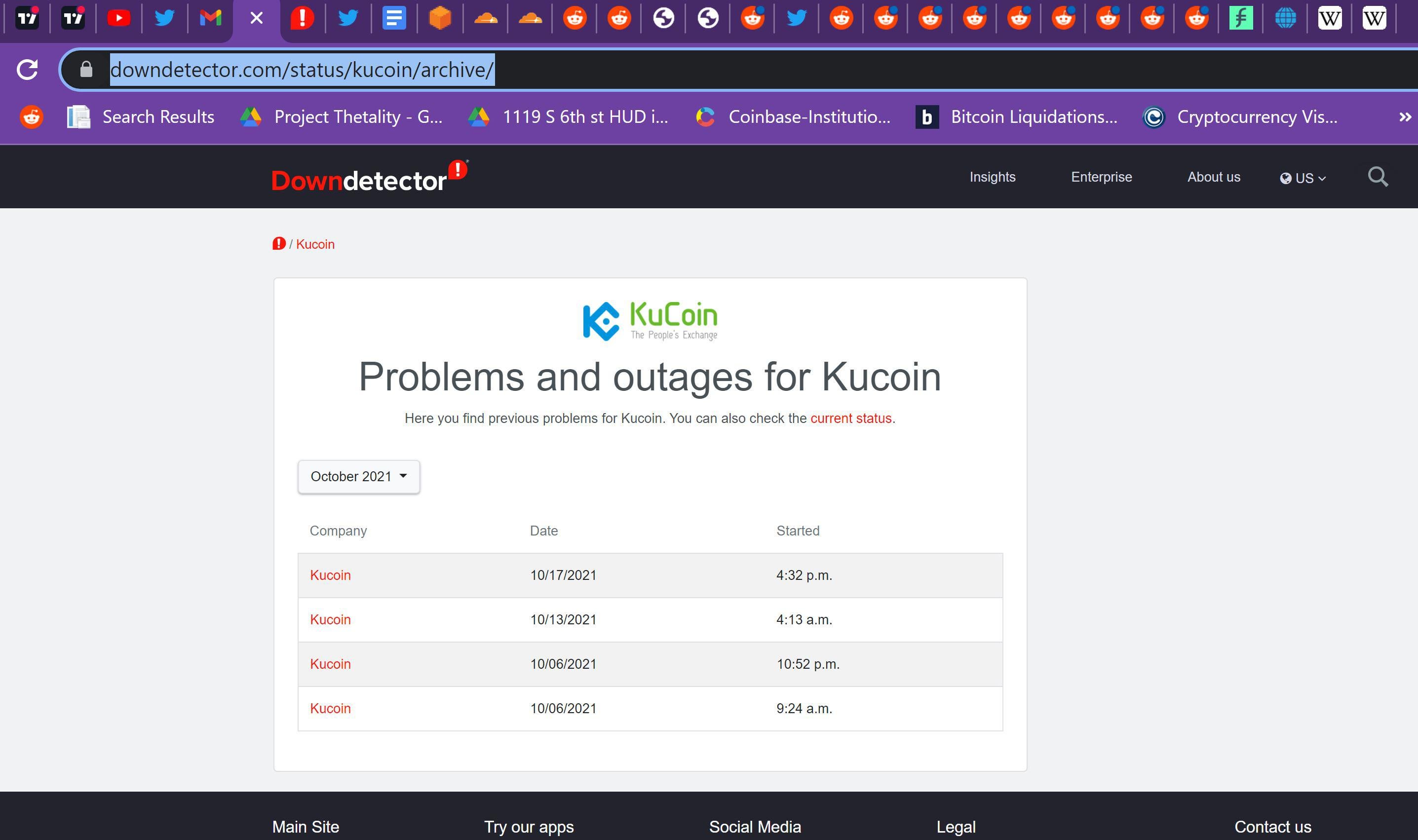 Essentially thier help desk team does nothing and they keep passing you back and forth until you give up.

In professional management the term for this is “being managed out”

They are getting system notices via email from amazon (e.g. You are at 89% cpu utilization you need to scale or you may face faliure)

Their Amazon (AWS) sales guy is calling them every day trying to sell them more services.

e.g. Hey i am your hypothetical Amazon Sales Guy ” I noticed you guys are throttling cpu load on webservers, can I offer you a bigger package and maybe we should tal;k about fail over locations incase your server goes down under load.

frankly, I would bet my life on it that they know this is an issue and why

There isnt a data center architect (what I did) on the planet that couldn’t answer why their servers are going down. This is 101 level stuff

This is VERY common design work, like windows to a house level … for lack of better comparrison

In Kucoins instance they let the webserver go down but the back end server was still moving. All the whales use OTC desks and have dedicated access. So they processed the whale orders and let all of us burn alive and took our money

Its safe to say they have ZERO plausible deniability

I went so far as to volunteer to fix the issue for free, 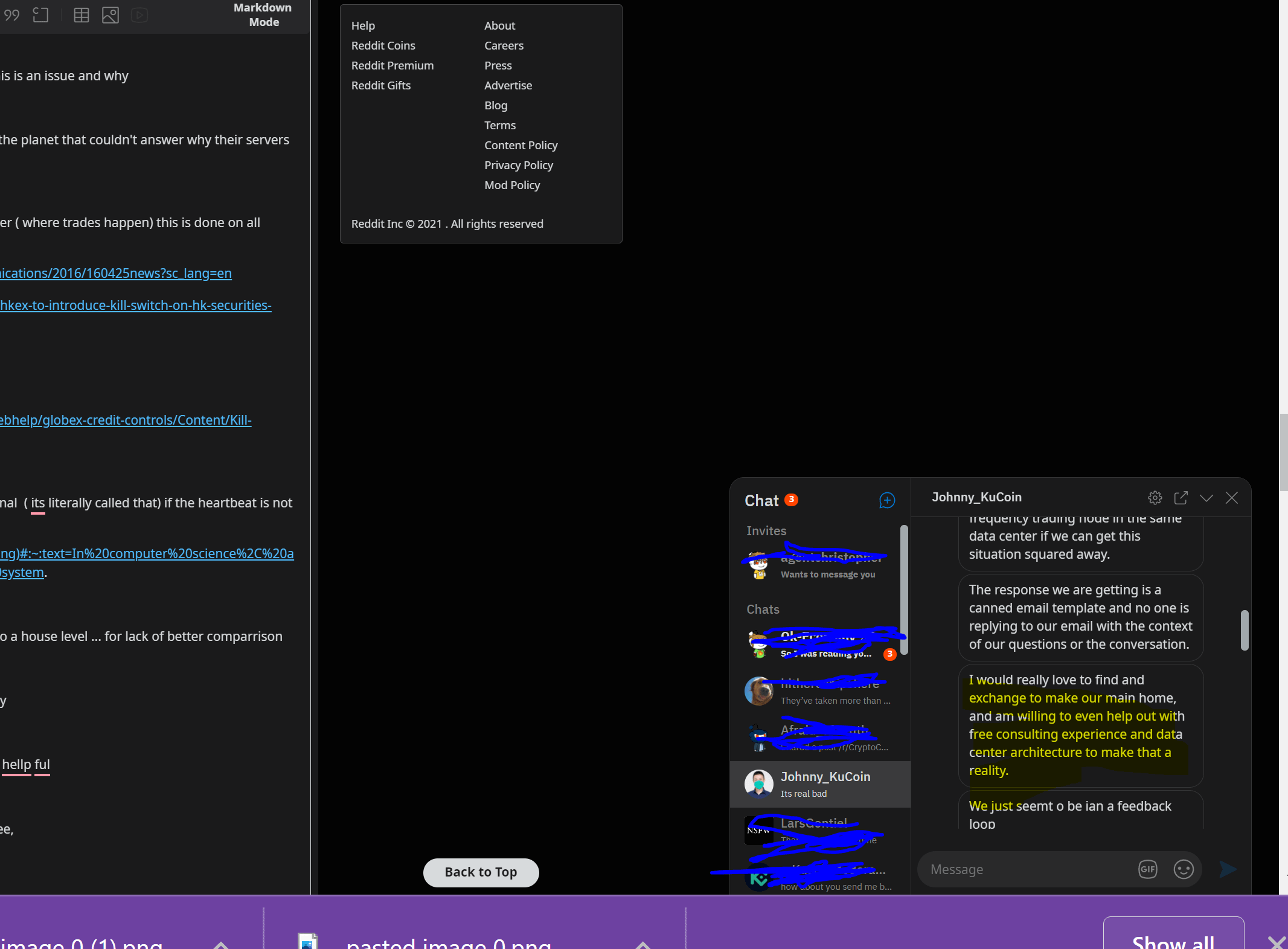 The CEO went so far as to acknowledge the outage happened and they would do the right thing but it was all BULL SH!t

IT was a PR stunt and no one go money anywhere close to thier losses. Here is his reddit post

To Those Affected by KuCoin Access Issue on Sep 7, Fill in the Form & We will Take Responsibility from kucoin