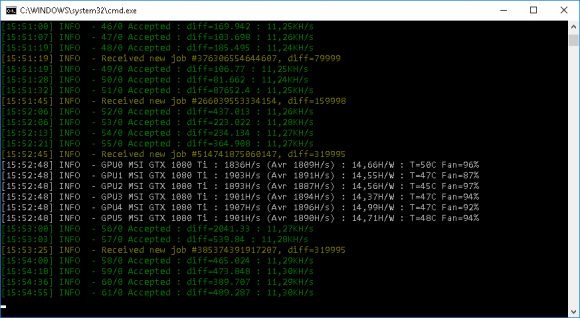 The Conceal (CCX) project is another attempt at a privacy oriented crypto coin that offers some interesting features one of which is the so called Decentralized Banking with coins getting locked to earn interest. Conceal is based on the Cryptonote protocol and uses the so called CryptoNightConceal algorithm, a variation that is based on CryptoNight and thus is considered to be an “AMD Coin” due to the fact that AMD GPUs usually do perform better in CN algos. With low mining profits and with more people looking into mining other interesting projects however even Nvidia GPU miners are looking into potentially interesting CN-based coins.

With the latest CryptoDredge v0.21.0 Nvidia GPU miner support for the CryptoNightConceal algorithm has been added and the performance does not seem that bad. The performance you can expect from a GTX 1080 Ti is around the same an RX 580 8GB can do (around 1700 h/s) per GPU. With the help of the OhGodAnETHlargementPill you can get an extra ~200 h/s per GPU and the best of all is that the power usage is pretty low compared to most Nvidia GPU algorithms (around 850W per 6x GTX 1080 Ti GPU mining rig at the wall). So you might want to give this a go, though currently the profitability even in this case is not that attractive, but hey… you are risking with something with potential here, that is the whole idea, right?