After long days of impeachment hearings and a vote to initiate an impeachment trial in the US Senate, it’s clear that the US Congress has had a busy week. However, in the midst of the largely partisan debates, a new bill outlining a set of regulations for digital currencies was introduced.

Forbes reported that the bill, dubbed the ‘Crypto-Currency Act of 2020’, has the stated objective to clarify which federal agencies are responsible for the regulation of digital assets.

Under the bill, digital assets would be sorted into three different categories: crypto-currencies, crypto-commodities, and crypto-securities.

As defined by the draft, the term “cryptocurrency” s defined as “representations of United States currency or synthetic derivatives resting on a blockchain or decentralized cryptographic ledger.” This can be determined by “decentralized oracles or smart contracts” and “collateralized by crypto-commodities, crypto-currencies, or other crypto-securities.”

The term “crypto-securities”, on the other hand, is defined as “all debt, equity, and derivative instruments that rest on a blockchain or decentralized cryptographic ledger”, with some exceptions, including synthetic derivatives that are operated under money services businesses.

The term “digital asset” is defined as “a crypto-commodity, crypto-currency, or crypto-security.” The draft of the bill also provided definitions for synthetic stablecoins, reserve-backed stablecoins, and decentralized oracles.

The roles of FinCEN, the CFTC, and the SEC would be made clearer

The draft of the bill places “crypto-commodities” under the jurisdiction of the US Commodity Futures Trading Commission (CFTC), and puts “crypto-currencies” until the Secretary of the Treasury (operating through the Financial Crimes Enforcement Network, or FinCEN). “Crypto-securities” are under the US Securities and Exchange Commission (SEC).

In a report for Forbes, former FDIC regulator Jason Brett wrote that “this is not the first sign that there may be a common role between [the three regulators] for this new asset class,” and pointed to an October statement by all three entities on activities involving digital assets with respect to their obligations under the Bank Secrecy Act.

Brett also pointed out that FinCEN “is generally considered more of a law enforcement agency than a traditional financial services regulator,” and cited FinCEN Director Kenneth Blanco, who explained at a New York Blockchain Symposium in November that for FinCEN exams,

“You should be able to tell your examiner, and/or your regulator like FinCEN, how you mitigate risks…identify potentially suspicious activity and comply with reporting and recordkeeping requirements — including the Funds Travel Rule,’ he said. “You can count on being asked about this during an examination.’ 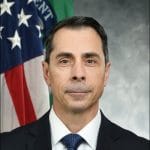 If passed into law, the bill would represent a step toward regulatory clarity for the cryptocurrency industry in the United States. The US has been criticized in the past for lacking regulations for the crypto industry.

However, efforts toward regulating crypto seem to have picked up speed within the country over the last several months, particularly following Facebook’s announcement of theso-called “Libra” project, a plan to build a global cryptocurrency network.

Some of the actions taken by the SEC in the last several months and over the last year have caused some to accuse the agency of “regulation by enforcement.”