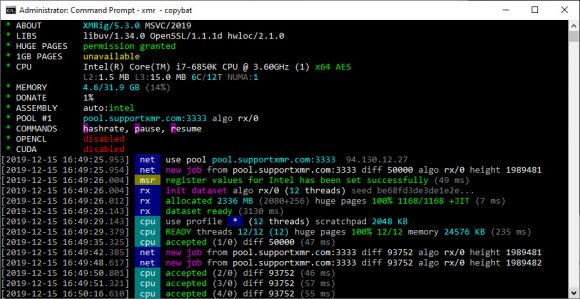 The latest release of the XMRig 5.3.0 comes with additional performance improvements for RandomX mining with AMD Ryzen users reporting up to 6-7% boost and less for Intel thanks to automatic disabling of the CPU prefetchers using the MSR registers on OS level (both Windows and Linux are supported). Prior to adding automatic support for that you could manually do the trick to get the same boost, but it is much easier when the miner does everything on its own (make sure you run with root/admin privileges. Since the RandomX algorithm accesses memory randomly prefetchers just don’t help and disabling them can actually help improve performance, so a nice extra boost in performance for RandomX that you should take advantage of. If you are using Lunux you can also try the 1GB huge pages support that was introduced recently in version 5.20 to gain an extra 1-3% performance.