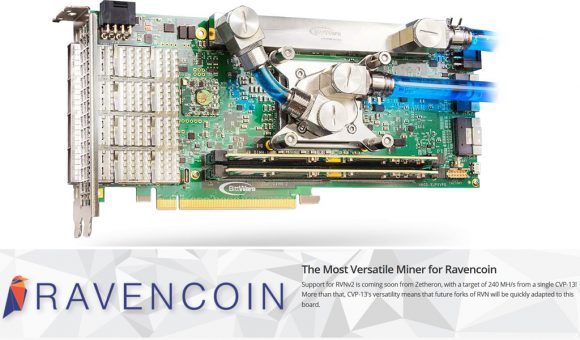 Back in October Ravencoin (RVN) forked to X16Rv2 as a means to drive away the ASIC miners for the X16R algorithm it previously used. The new algorithm X16Rv2 has helped lower the hashrate and make RVN mining prfotable for mining with GPUs for a bit, but now it seems we are getting back on the road to ASIC miners in the near future for the new algo. The X16Rv2 is apparently getting bitstreams for FPGA miners like the BittWare CVP-13 FPGA with 240 MH/s cited hashrate for the initial release… this is faster than 6x GTX 1080 Ti GPU mining rig with a third of the power usage. The only catch is that the CVP-13 FPGA Cryptocurrency Mining Board is pretty expensive, but unlike ASICs it can be used for a number of algorithms and with future bitstream updates can be much more futureproof. Of course the next step is new ASIC miners coming in the near future for the new X16Rv2 algorithm with Ravencoin getting quite a lot of attention from users.