With self-sovereignty comes great responsibility. Being your own bank can be scary. After all, there’s a reason banks became a feature of modern society: they control the custody of assets, assume the risk of these assets and insure them for their customers.

This is why most Bitcoiners hold security as the highest virtue. If you want to be your own bank, you need to make sure you’re taking every step necessary and available to secure your bitcoin from theft, seizure and damage. In this regard, no measure is too extreme. There is no such thing as being too secure.

This is why Ragnar Lifthrasir of Guns n’ Bitcoin created the Scorpion Case. Hardware wallets (with the added security buff of multisignatures) offer best-practice custody for your average user, but this may not be enough. In the event of a fire or natural disaster, if these wallets are destroyed (and the seed phrase backups destroyed with them), you can kiss goodbye to your hard-earned satoshis.

The Scorpion Case is meant to mitigate against physical damage and even assault — in addition to its padded interior that houses your hardware wallet, it also comes with molds to hold a handgun, two magazines and a knife (if this sounds paranoid, well you just haven’t considered every attack vector).

To see if the Scorpion Case is up to snuff, I ran it through a number of stress tests. These included: blunt force testing, waterproof testing, fire testing and bulletproof testing.

Now, Lifthrasir’s company, Guns n’ Bitcoin, only advertises the Scorpion Case’s resilience against physical and water damage. It says nothing about fire, let alone firearm, resistance, but I wanted to test it all the same. I wanted to see just how sturdy this case was and if you can trust your hardware with it.

I would find that the Scorpion Case can take one hell of a beating.

Before we go over the stress tests, let’s start with the basics. 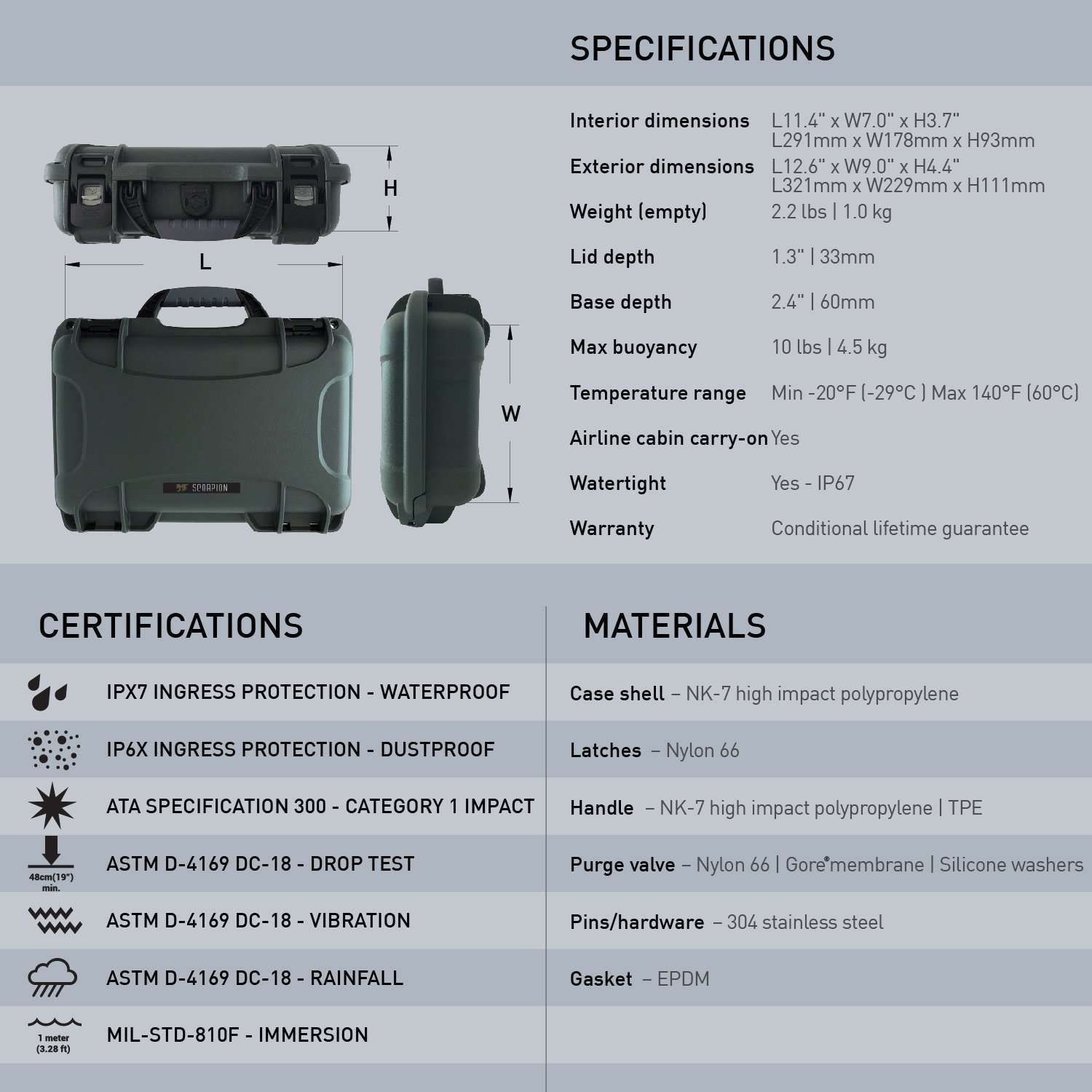 The case weighs in at 2.2 pounds with a 12.6-inch long, 9-inch wide and 4.4-inch high exterior. Its case shell is made of NK-7 polypropylene, a common industrial resin that is made to be both lightweight and sturdy. Guns n’ Bitcoin’s website advertises a water immersion resistance of up to 3.28 feet and heat resistance of 140 degrees Fahrenheit.

Internally, the case is lined with closed-cell PEF foam on the bottom and a convoluted lid foam on the top to insulate hardware. Its molds can house a pistol, multiple hardware wallets, USB hookups and pistol ammo magazines.

The release latches come with pinholes added to a padlock, and the hinges are underpinned by stainless steel. 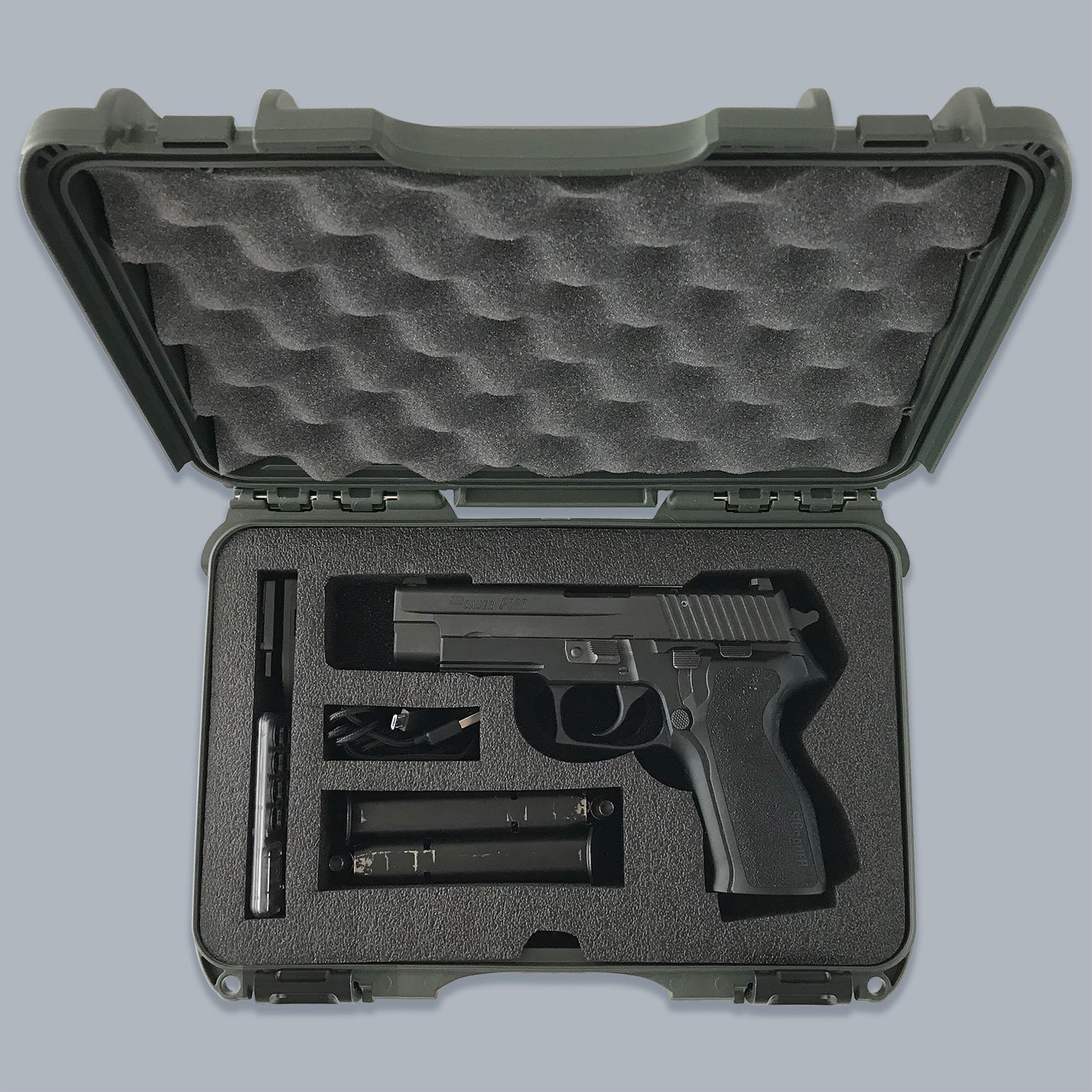 Retailing for $88, the Scorpion Case is a bit pricier than other NK-7 polypropylene cases of its size, though Guns n’ Bitcoin is running a 30 percent off sale for the holidays that brings the price in line with other options.

With these specs in mind, let’s beat this sucker up.

For my first test, I bludgeoned the Scorpion Case with the blunt side of a splitting maul, and then I flipped the case to its other side to test its resistance to the axe end of the maul.

Guns n’ Bitcoin says that the case is built to withstand a category one impact under Air Transport Association (ATA) specification 300 — that is, it conforms to standards set by the ATA for hard case designs and impact resistance.

This basically means that the case is meant to withstand moderate trauma. It doesn’t, however, say anything about being resistant to heavy blows from something like a sledgehammer. With this in mind, the case exceeded my expectations from test one.

The first swing with the sledge end of the maul left a dent, and I was pleased to see that the hardware wallet I inserted into the case before testing was unscathed. Now, I have no way of measuring the PSI of the swing, but I came down with all my strength on the case and it withstood the test. 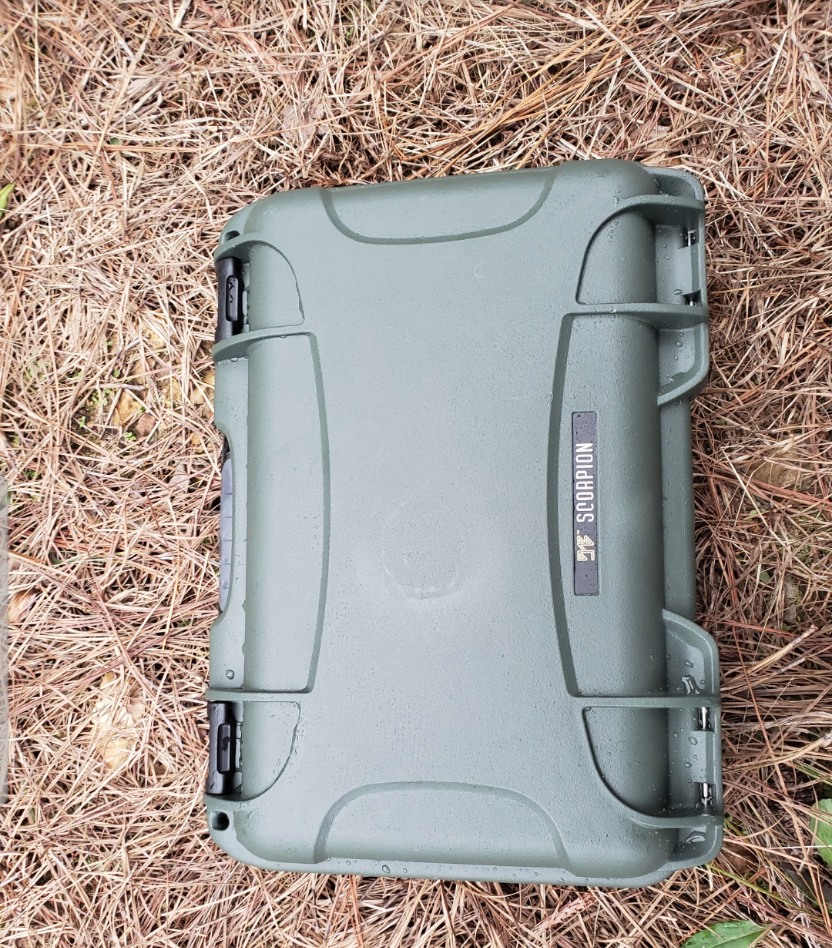 The sledgehammer hit left a faint dent in the middle of the case.

The sledgehammer hit left a faint dent in the middle of the case.

Next, I swung with the axe. To be expected, the resin cracked under this pressure (I anticipated this because, again, the case makes no guarantees against this kind of trauma), but it did not shatter. And once again, the hardware wallet was still intact.

So, all of that to say, in the rare event that someone takes a sledgehammer to your Scorpion Case, it’s going to hold up for at least the first few swings. Additionally, if your house were to come toppling down, I’d imagine your hardware would remain safe under the rubble.

When it comes to impact resistance, the Scorpion Case performed very well under pressure. 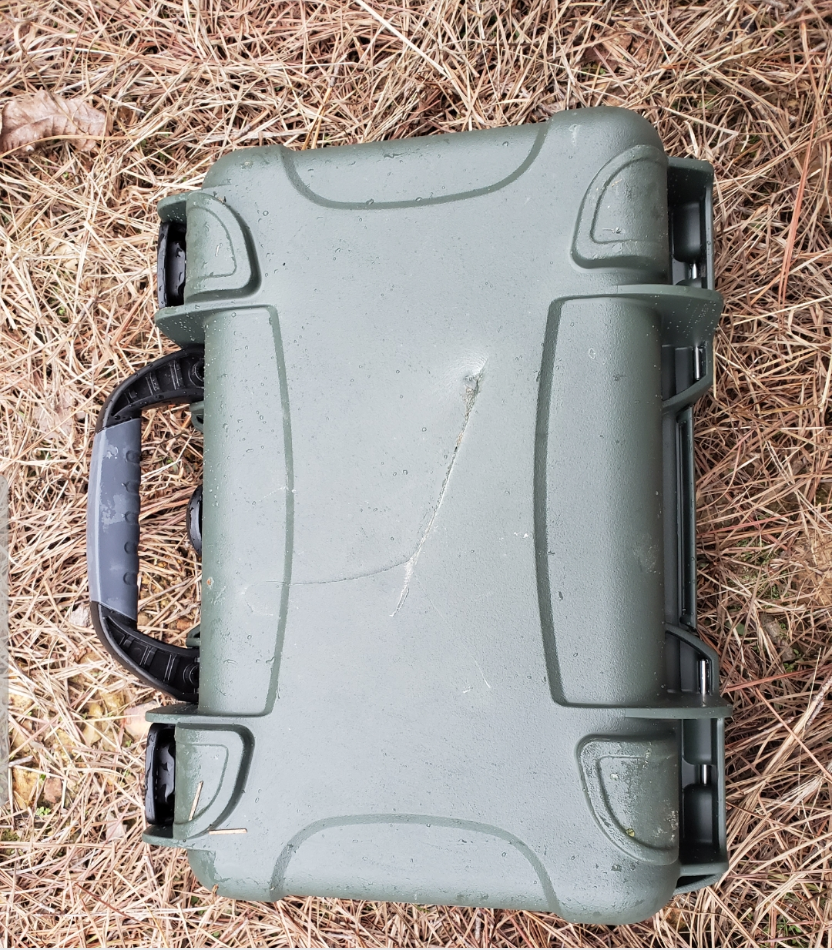 The axe blow split open the back of the case.

The axe blow split open the back of the case.

For this next test, I ran the case under running water, back and front, for about ten seconds.

Boring compared to an axe attack, I know, but it had to be done and, to be honest, there’s not much else to report. It’s as watertight as advertised, and even with the crack in the back from the axe blow, a negligent amount of moisture pooled behind the PEF foam but did not seep into the foam itself or run anywhere near the hardware wallet, which remained completely dry.

Regretfully, I didn’t think to do an immersion test, but given that no water breached the case under an open faucet, I would venture to bet that it’s good down to at least 3.28 feet as advertised and maybe even more. At the very least, if it’s exposed to rain or some leakage in its storage space in your house, you have nothing to worry about.

Once again, Guns n’ Bitcoin does not advertise its case as being fire resistant (only heat resistant up to 140 degrees Fahrenheit).

Still, I couldn’t help but to push the limits. So, using isopropyl alcohol and an old t-shirt (after a failed attempt at setting it ablaze with a molotov cocktail — yes, feel free to laugh), I exposed the underbelly to fire for about a minute.

The end result: The case withstood the flame but left the exterior’s plastic carbuncled with heat damage and melted off bits of the rubber-lined handle. It also fused the bottom and the top lip of the case, so I couldn’t open it with my bare hands afterward (the latches were unscathed, though). 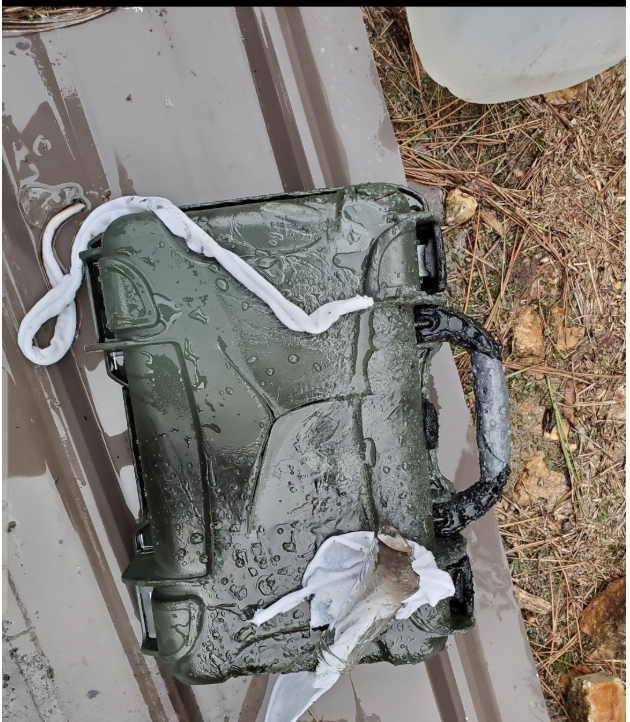 Post-fire damage to the back of the case.

Post-fire damage to the back of the case.

The flame-licked resin fusing together is of little surprise, especially considering the heat would have been well above the 140 degree Fahrenheit mark (~1000 degrees Fahrenheit). That said, the hardware wallet was undamaged (as I would figure out after the next test) and the case’s shell was only bubbled over with heat damage, not burnt through from the test.

It wouldn’t survive a house fire, but it’s not supposed to anyway.

This final test took the case to the extreme, well beyond what Guns n’ Bitcoin claims it can withstand.

For the first firearms test, I unloaded two 2 and 3/4 inch, 1 ounce birdshot shotgun rounds from a 20-gauge shotgun into the case from a distance of roughly 15 yards. Both of the shots blew the case wide open, thereby splitting the fused lid.

But the hardware wallet was still largely intact. The only deformity came from a crack caused by one of the pellets from the birdshot. I was shocked to see that it wasn’t completely shredded. In fact, the BB that did hit it was one of the few that actually penetrated the case. The NK-7 polypropylene absorbed most of the blow, and most of the BBs were embedded in the exterior casing. 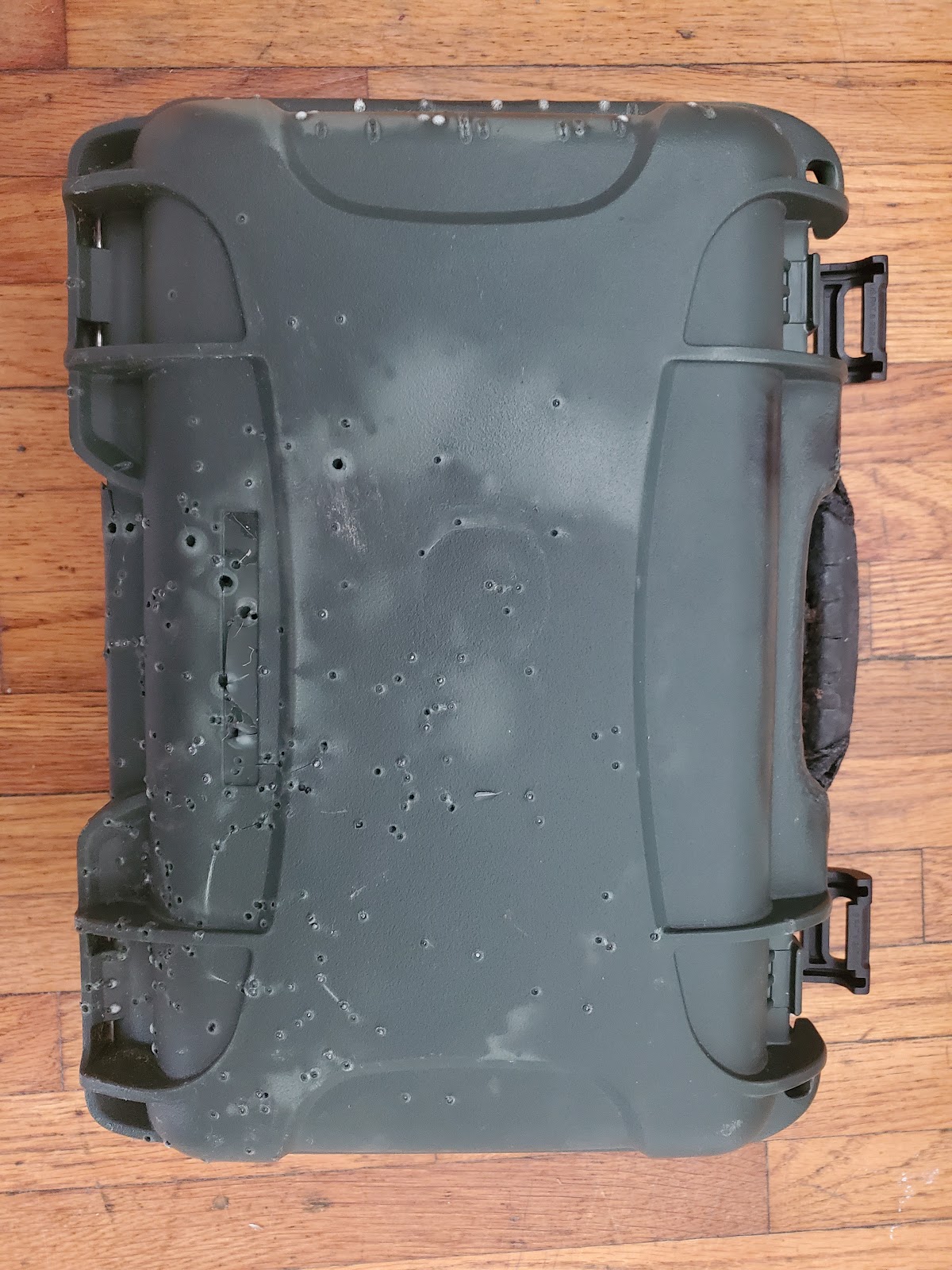 The case after getting pumped with two rounds of birdshot and multiple .223 rounds.

The case after getting pumped with two rounds of birdshot and multiple .223 rounds.

For the final test, I put the Scorpion Case up against an AR-15. Now, for those of you who are unaware, an AR-15 is essentially a semi-automatic, civilian version of the M16, one of the U.S. military’s most ubiquitous rifles. It shoots a 5.56 NATO round (and/or .223 Remington round, depending on the manufacturer) and can penetrate steel.

So naturally, it cut through the Scorpion Case like butter. I unloaded roughly 10 rounds into the case from 15 yards. The final two rounds, which entered the case from its bottom side just between the hinges, chipped two significant pieces of casing off. The hardware wallet, still, was undamaged, but if it had been in the path of one of the bullets, it would have been torn to bits. 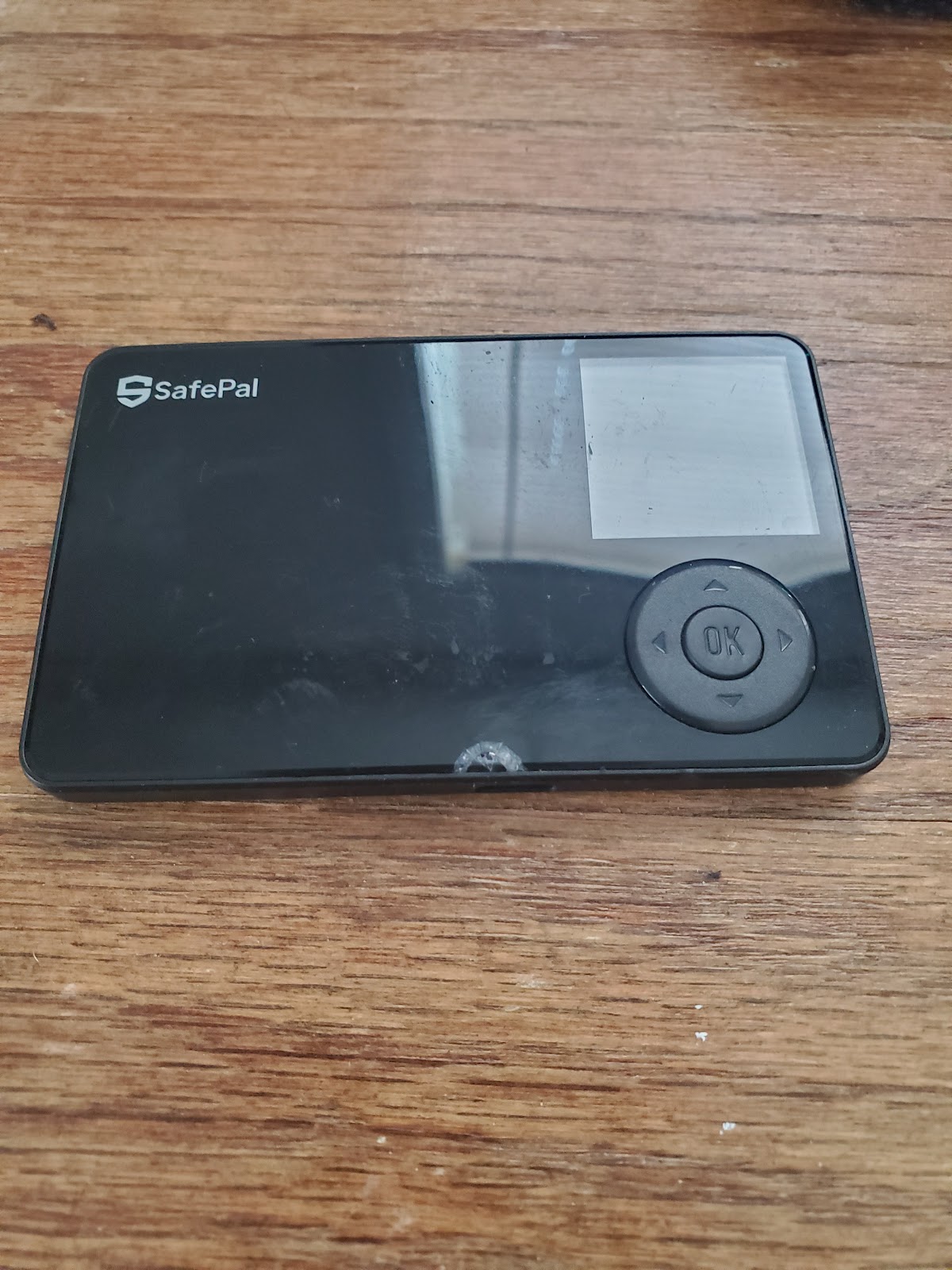 The only discernible damage on the hardware wallet following these stress tests was a chip from one of the BBs fired into it on its bottom lip.

The only discernible damage on the hardware wallet following these stress tests was a chip from one of the BBs fired into it on its bottom lip.

It basically took an AR-15 to really bust up the Scorpion Case. While the 20-gauge blew the case open, the exterior still absorbed the vast majority of the birdshot and kept the wallet safe — and the latches still worked after this test, too. A shotgun from relatively close range would be enough to damage the case, but it probably wouldn’t be enough to break all of the hardware it houses. 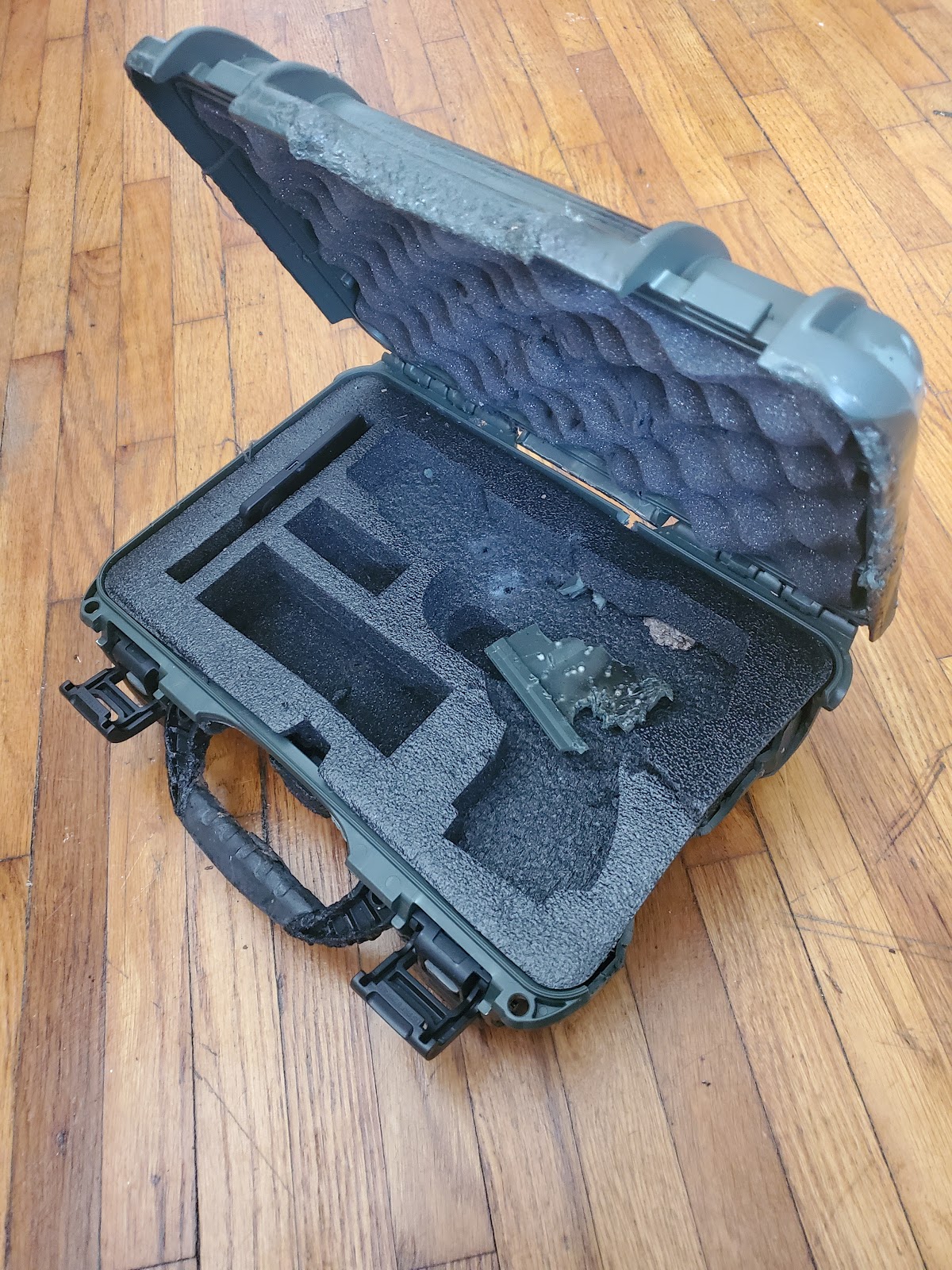 The interior of the case after the final test.

The interior of the case after the final test.

Overall, the Scorpion Case performed admirably under all of the stress tests. It’s impressively resistant to both blunt and sharp force trauma and is as watertight as you’d need. It’s not completely flame retardant, but even so, it resisted the fire well enough to keep it from eating a whole through the casing (prolonged exposure would still probably turn the thing into a hard, resinous lump, but Guns n’ Bitcoin isn’t making any promises there, and it was still incredibly resilient under the ~1000 degrees Fahrenheit I subjected it to).

My only regret is that I pushed the case to its limits and effectively destroyed it over the course of the tests. The fire and firearms really pushed it over the edge, but — if I can stress this one final time — even under these extreme conditions the hardware wallet escaped intact and is still operational. 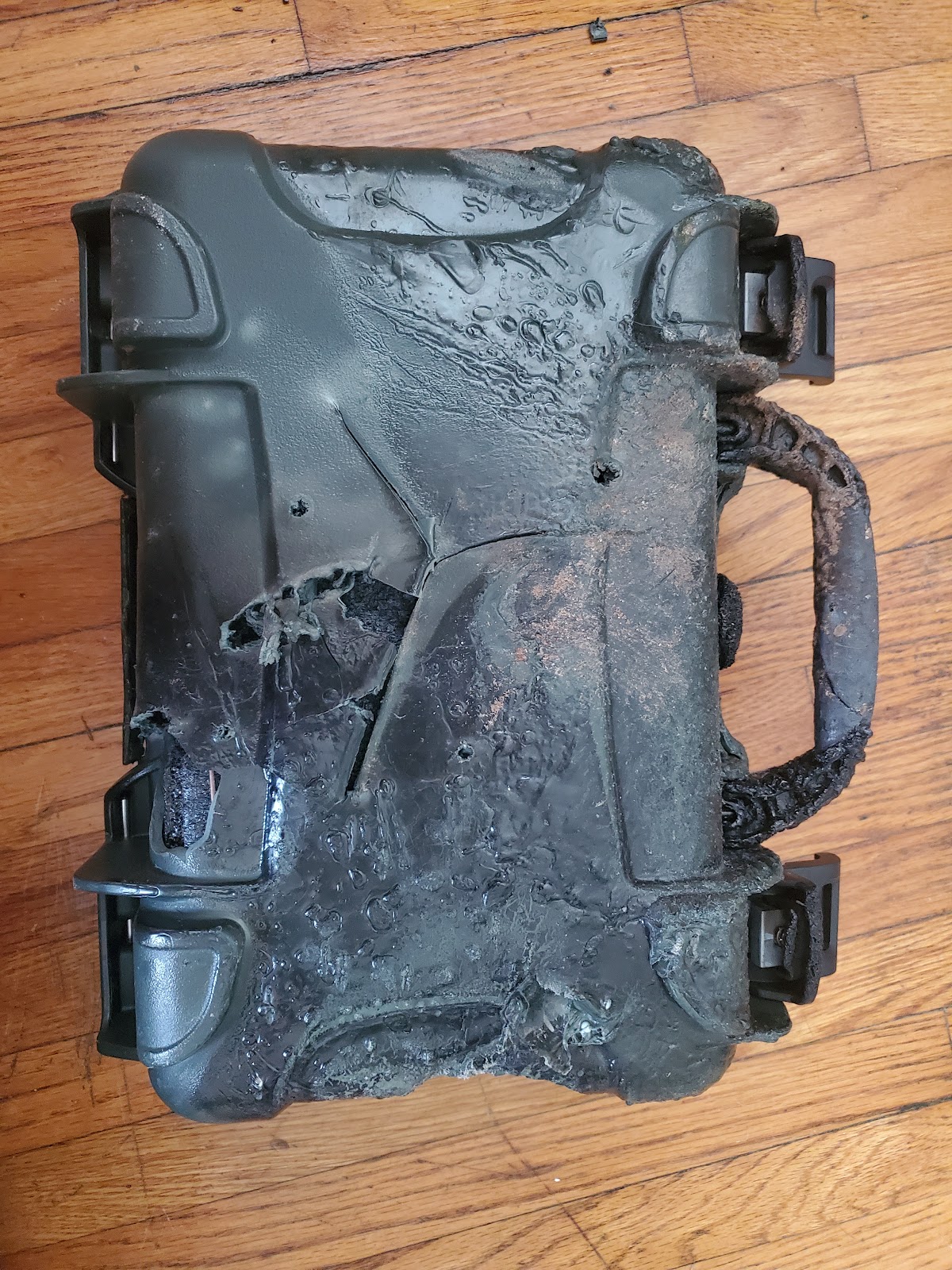 The back of the case following its trials.

The back of the case following its trials.

If you’re a Bitcoiner and looking for a solid case to protect your hardware, the Scorpion Case is top of the line — it under promises, over delivers and provides a sturdy, all-in-one option to hold all of your hardware wallets and your pistol (self-sovereignty in a box).

If you’re interested, you can purchase it for 30 percent off at Guns n’ Bitcoin just in time for the holidays.